However, Fine Gael doesn’t get too many votes on islands now, several residents recalled 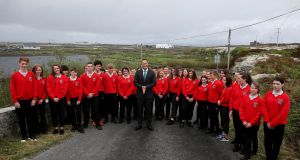 An Taoiseach Leo Varadkar with pupils of Coláiste Naomh Eoin on Inis Meáin, Aran Islands, during a visit to mark the schools establishment as a single entity school. Photograph: Brian Lawless/PA Wire

When a taoiseach visits an island like Inis Meáin in a month like September, the sun should be shining and the limestone landscape extending back to the Burren should make for wonderful imagery.

Imagery, indeed, that might make for election material, with good profile shots across stone walls against an indigo Atlantic proving that this Government extends further west than Dublin West. for all of a two-hour visit, at least.

However, thick fog and a thin drizzle delayed the taoiseach’s flight by Air Corps helicopter to the middle Aran island on Wednesday afternoon, and constant cloud did not clear for the cameras.

Three gardaí – two from Inis Mór – were on duty outside Coláiste Naomh Eoin as the secondary school’s acting principal, Mairéad Ní Fhatharta, and her staff of 12 and her 40 pupils awaited Mr Varadkar’s arrival.

Also present were Galway county cathaoirleach or mayor, Sean Ó Tuairisg (FF) and Galway West TD Éamon Ó Cuív, still remembered by islanders as the best and only full Cabinet minister they ever really had.

Fine Gael doesn’t get too many votes on islands now, several residents recalled. The last Fine Gael taoiseach to visit Inis Meáin was John Bruton, and it had been one Charles J Haughey before that – neither “inniú, nor inné”.

This occasion was the handing over of a new roll number to the secondary school, which was set up unofficially by the late Pól Ó Foighil, and run for many years under the mainland patronage of Coláiste Cholmcille, Indreabhán.

Its newly acquired independent status under the Galway and Roscommon Education and Training Board (GRETB) allows it to have its own principal for the first time, GRETB education officer Tomás MacPháidín explained. However, as the third tiniest school of its type in the State and one of only five-post primaries on islands, it also needs “small school” status, he added.

In fact, islands have a long list of demands for this particular administration, which has no islands policy and a chaotic attitude to medical provision and transport – with Aer Arann due to surrender its air contract serving all three Aran islands at the end of this year.

Inis Meáin and Inis Oírr have no permanent GP, and both RNLI lifeboat and Irish Coast Guard helicopter crews are being relied on for both ambulance services and routine medical transport. The Health Service Executive (HSE) will no longer sanction transport of patients from the Aran islands by fixed wing in non-life threatening situations.

First, however, were the priorities: photo opportunities and a doorstep with journalists, where Mr Varadkar was keen to emphasise that he was being “transparent” in seeking to extend the Government’s confidence and supply agreement with Fianna Fáil.

He didn’t know about small school status when asked, was keen to respond to at least one question as Gaeilge, and was then whisked into Halla Naomh Eoin for a series of speeches which extended well beyond the school bell.

When it came to his turn, Mr Varadkar had his words prepared as Gaeilge.

“Cuireann sé an-áthas orm a bheith anseo in bhur dteannta inniú chun an ócáid speisialta fíor-thábhachtach seo a cheiliúradh libh in Inis Meáin,” he started. In the warm hall, there was every expectation he would break into English very soon.

Instead, he continued, quoting at one point from Nuala Ní Dhomhnaill’s poem, Ceist na Teangan, and paying tribute to the “scoláirí” in the school – almost 50 per cent of whom are from the mainland and studying through Irish.

There were no big announcements, no promises of a permanent island minister. Independent TD for Galway West Catherine Connolly, not often a fan of the Government, noted that the quality of his reading in Irish was so good that she almost forgot about the quantity – as in the fact that nothing very much was really said.