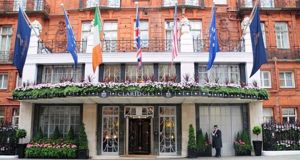 Paddy McKillen has been fighting for five years over the ownership of Claridge’s (above), The Berkeley and The Connaught hotels

Qatari investors allied to developer Paddy McKillen have bought out his rivals, the Barclay Brothers, for the ownership of three high-end London hotels for a reported €1 billion.

The move ends a court battle the Irish businessman has been fighting for five years over the ownership of Claridge’s, The Berkeley and The Connaught hotels. Constellation Hotel Group, owned by the state of Qatar, has bought 64 per cent of the company that owns the hotels, Coroin Ltd, from British property tycoons Sir David and Sir Frederick Barclay and Irishman Derek Quinlan.

The deal means Mr McKillen and the Barclays are dropping all action over the ownership of the three hotels. The Irish man first went to court when the brothers acquired debt linked to the properties from Nama and other investors in 2010.

Mr McKillen will keep his 36 per cent stake in Coroin while Constellation controls 64 per cent. The Qatari group previously offered to back him in his dispute with the Barclays and the Irish developer was said to be happy with the sale.

Barclays representative Richard Faber said they were pleased the hotels were now majority owned by Constellation. As the brothers bought Mr Quinlan’s debt from Nama, it is understood he will receive nothing from the sale.

Mr McKillen was one of a group of investors who backed Mr Quinlan’s purchase of the three hotels, and the Savoy, which they sold shortly afterwards in 2004 for €950 million.

The agreement between the parties gave him first refusal over Mr Quinlan’s stake if it came on the market. However, the Barclays bought Mr Quinlan’s loan from Nama, giving them control over his holding.