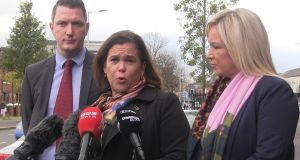 Sinn Féin is to stand aside in three Northern constituencies in December’s general election and has urged its voters to back other candidates who support staying in the EU in order to help defeat the pro-Brexit DUP.

“The reality is we are asking people to come out and vote for those pro-remain candidates. We believe that is the right and progressive thing to do,” Sinn Féin leader Mary Lou McDonald said.

Speaking to reporters in Belfast on Monday, she said the “stakes are very high” in the December 12th election.

“People have a fundamental choice to make - to vote for a positive, inclusive future or to turn their backs on that and to back candidates who have been the architects of Brexit and who have acted very, very deliberately against the democratic wishes of people here in the north and more fundamentally against the economic and social interests of citizens who live here,” she said.

In North Down, Lady Sylvia defeated the DUP candidate Alex Easton with a narrow majority of about 1,200 in 2017.

Ms McDonald said there was no contradiction in asking republicans to vote for a unionist.

“It sits very comfortably with me to ask and invite voters to thoughtfully do the right thing,” she said.

“And in this case it means defying hard Brexiteers, the likes of Nigel Dodds, the likes of the DUP candidates who have very, very recklessly acted against the interests of everybody.

“Whether you call yourself a unionist or a nationalist, a republican or a loyalist, we actually have many, many interests in common.”

The DUP’s Emma Little-Pengelly is defending a majority of 2,000 in South Belfast, with Mr Hanna considered a strong contender to take the seat.

Her party, the SDLP, has also announced that it will not stand in East Belfast, North Belfast or North Down.

“Our first priority is to elect pro-remain MPs to vote against Brexit and Boris Johnson but removing pro-Brexit MPs in Belfast is also critical,” the party said.

The SDLP’s withdrawal from North Belfast strengthens the position of the Sinn Féin candidate John Finucane, the Lord Mayor of Belfast, who came within 2,000 votes of the DUP’s Nigel Dodds at the last election in 2017.

The absence of SDLP and Sinn Féin candidates in East Belfast is intended to strengthen the position of Ms Long against the sitting MP, Gavin Robinson of the DUP.

The Ulster Unionist Party (UUP) said on Sunday that it will not run a candidate in North Belfast. The party’s incoming leader, Steve Aiken, had previously said the UUP would field candidates in all 18 of the North’s constituencies.

In a statement, Mr Aiken said the UUP “a party that believes first and foremost in the Union” and he could not “gift” the seat to Sinn Féin.

A police investigation is underway after threats were made to the UUP, allegedly by loyalist paramilitaries, over its initial refusal to form an electoral pact.

The DUP has said it will continue not to contest Fermanagh and South Tyrone constituency, where Sinn Féin’s Michelle Gildernew is the MP. Tom Elliott of the UUP, who won the seat in 2015 before losing it back in 2017, has not yet confirmed if he will stand in the constituency.