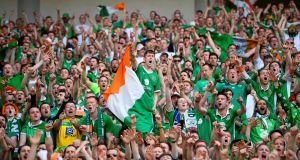 Irish fans cheer after the match between France and Ireland at Stade de Lyon in Lyon. France won 2-1. Photograph: EPA

Paris is to honour Irish football supporters, from both the Republic and Northern Ireland, for their behaviour during Euro 2016.

The city’s mayor, Anne Hidalgo, said she would award the fans the “Medal of the City of Paris” in recognition of their “exemplary attitude” during the tournament.

Thanking them for their contribution to the festive atmosphere created over the past fortnight, she called them “a model for the supporters of the world”.

The Paris medal has been awarded periodically since 1911 for “exceptional behaviour”.

Recent recipients include the footballer Zlatan Ibrahimovic, who spent the past four seasons playing for Paris St Germain and who retired from international duty after Sweden’s elimination from the Euros.

His last international game in Paris was the 1-1 draw with the Republic of Ireland, which coincided with several nights of celebration by thousands of Irish supporters on the city’s Boulevard de Clichy.

The scenes attracted some local criticism, but also to much positive coverage in the French media.

Ms Hidalgo has written to both the President of Ireland Michael D Higgins and to Northern Ireland First Minister Arlene Foster, informing them of the award.

The medal is to be presented at a ceremony involving representatives of both teams’ fans, “in the coming days”.

Taoiseach says €350 pandemic payment to be cut for some part-time workers 13:15
Sunniest spring on record in Dublin with rainfall 70% below average 13:02
Minister says no decision yet on cutting Covid-19 payments 12:58
Trade unions call for emergency funding to tackle ‘crisis’ facing third level colleges 12:10
O’Doherty and Waters ordered to pay legal costs of case against State over Covid-19 laws 11:48

1 O’Doherty and Waters ordered to pay legal costs of case against State over Covid-19 laws
2 Madeleine McCann case: ‘We assume the girl is dead’, German prosecutors say
3 Strict rules on queuing as Dublin shops prepare to reopen
4 Coronavirus: Ireland has higher per capita death ratio than US, study finds
5 Tyrone midwife on the cover of Vogue magazine
Real news has value SUBSCRIBE