Mayo woman dies after flight home from holiday with fiance 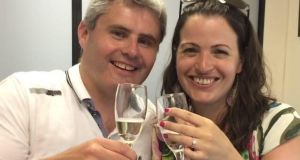 Barry Dohery and Majella Donoghue pictured on their recent trip to South Africa to collect her engagement ring. Photograph: Facebook 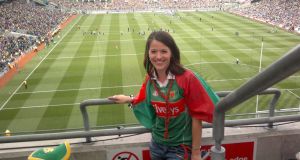 A family in Co Mayo is waiting to receive the remains of a woman, who died after she became ill on a flight home from a holiday South Africa with her fiance .

Majella Donoghue (30), from Tirrane, Belmullet was attended to by her fiance, Barry Doherty, and flight staff, when she suddenly became seriously ill on the fight from Capetown to London Heathrow. When the plane touched down on Sunday last, an ambulance was waiting to take her to hospital.

She died later in hospital with her fiance by her side, as well as a family member who had travelled over from Ireland.

It is understood an autopsy has been carried out but the results are not yet available. Her remains are still in London.

In the past few days, people have been flocking in large numbers to the Donoghue household to sympathise with the Donoghue family, her mother, Mary, twin brother, Stephen, brothers, Tommy, David and Brendan and her sister, Angela.

Ms Donoghue has been described as “vivacious and kind-hearted”. She worked as a “talent aquisition specialist” at Galway city-based firm, Boston Scientific. She was predeceased by her father, Willie, some years ago.

Local priest, Fr John Loftus said on Thursday that the community was numbed by the sudden death of a woman who was “pleasant, considerate and kind.” He added: “Just to meet Majella would put you in good form.”

She also worked as an advocacy volunteer for the Irish Society for the Prevention of Cruelty to Children, as well as for the Christina Noble Children’s Foundation.