Mayo coastline from Westport to Achill to Erris ‘whacked’ by storms 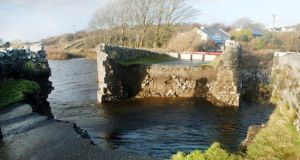 After standing for over a hundred years, the bridge that linked Rosmoney and Westport in Co Mayo was brought down by the waves and winds, forcing the people of Rosmoney to endure a three-mile detour to reach their nearest town. Photograph: Paul Mealey

“Pretty well whacked” is how guesthouse and gallery owner John Barrett describes the impact of one of the highest tides in living memory on Achill island, as members of the island community gathered yesterday for a voluntary clean-up at Dooagh.

Had it not been for the rock armour which he installed at his own cost after a similar flooding in 1991, Barrett believes his situation could have been far worse. This time, sea surges engulfed several rooms of his guesthouse and gallery at Keel, along with the area’s famous Sandybanks, Achill Golf Club and local sports pitches.

Mayo’s coastal margins from Westport’s Carrowholly to Achill to Erris suffered severely over the past three weeks, while the river Moy burst its banks last Friday in Ballina. Roads and pavements were ripped up, bridges split (in the case of Carrowholly, destroyed), piers damaged, and blue flag beaches transformed into lunar landscapes.

“There are far worse off than me,” Barrett says, describing how Ann McHugh’s house at Dooagh was flooded last Friday and again on Monday. At the home of harpist Laoise Kelly, a wave came through her front door.

Three houses were badly flooded at Dooagh, while windows were broken in another dwelling nearby. Dooega, Cloughmore and Purteen harbour were also “hammered”, and a 20-metre fin whale recently buried on Keel beach surfaced again during the storm.

John McHugh said his sister had managed to clear five or six inches of water from her Dooagh home over the weekend, only to be encircled by four feet of water early on Monday morning. She had been forced to move out.

At Elly Bay near Belmullet, a man on his way to Knock airport had to be rescued from his car by the Belmullet fire brigade.

“Locals say this was the highest tide in 30 to 40 years,” Ciarán Ó Murchú, owner and manager of Coláiste Uisce adventure centre, told The Irish Times.