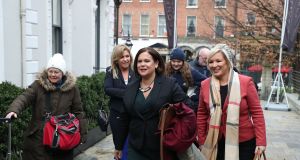 Sinn Féin leader Mary Lou McDonald has asked voters who may be unsure of supporting her party to “give us a chance” because other political parties have “squandered” theirs.

Ms McDonald again repeated her view that she should be allowed take part in the main televised leaders’ debates during the general election campaign.

The first head to head debate between Taoiseach Leo Varadkar and Fianna Fáil leader Micheál Martin takes place on Virgin Media One on Wednesday, with the second on RTÉ One on Tuesday, February 4th, just days before polling day on Saturday, February 8th.

Both broadcasters are also holding debates featuring Mr Varadkar, Mr Martin and the other parties but Ms McDonald believes she should be given equal billing with the leaders of Fine Gael and Fianna Fáil.

She was speaking after the latest Irish Times/Ipsos MRBI poll showed a surge in support for Sinn Féin, which was on 21 per cent compared to Fianna Fáil on 25 per cent and Fine Gael on 23 per cent.

Ms McDonald on Tuesday addressed a Sinn Féin gathering in the Round Room of Dublin’s Mansion House to mark the 101st anniversary of the sitting of the first Dáil in the same venue in 1919.

She said Sinn Féin in government would push for a referendum on Irish unity by 2025, and said Election 2020 has to be “the watershed in which the dominance that overbearing dominance of Fine Gael and Fianna Fáil in Irish political life…needs to be over”.

The Dublin Central TD criticised Mr Varadkar, Mr Martin and Labour leader Brendan Howlin - who she called “these three wise men of failed governments and broken promises” - for saying they would not enter government with Sinn Féin.

Her party is running 42 candidates across the 39 election constituencies. The 33rd Dáil will have 160 seats, meaning 80 will be needed to secure a majority after the election of a Ceann Comhairle. Sinn Féin would need all but one of the candidates it is standing to be elected if it were to be the major partner in a potential post election coalition.

Asked if she could be taoiseach after the election or lead a government, Ms McDonald said: “The reality is that unless something extraordinary happens, the days of single party government are over. Neither of the two men concerned are guaranteed either that they will have 42 seats.”

Pearse Doherty, the Donegal TD and finance spokesman, said he has written to Virgin Media and RTÉ challenging their decisions to exclude Ms McDonald from the two debates.

“We expect them to reverse this decision. As Mary Lou said this is an issue of fairness. And I will be meeting with our legal team later on this evening. And as I said, if we haven’t heard from the stations before that we will consider all options,” he said.