Martin pressures Varadkar to speed up funding for ‘restructured’ RTÉ 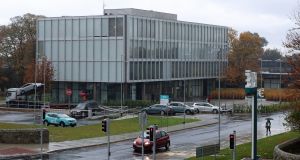 The RTÉ campus, Donnybrook, Dublin 4, as the broadcaster announced it will cut some 200 jobs next year. Photograph: Niall Carson/PA Wire

Taoiseach Leo Varakdar and Fianna Fáil leader Michael Martin have both promised changes to RTÉ’s licence fee rules to provide extra revenue for the cash-strapped broadcaster but have insisted that it carries out major reforms.

Despite pleas from RTÉ for quick action, Mr Varadkar said there would be no additional financial help for the broadcaster next year but held out the possibility that this could happen in the future.

However, Mr Martin said the Government’s decision to postpone the introduction of a new broadcasting charge for five years was “madness” and said Fianna Fáil would, in power, bring in a new charge within a year.

“RTÉ does need restructuring, I accept that. We do need to make RTÉ more efficient and effective and streamline its operations. There is a gaping hole in terms of the finances and the financial underpinning.

“I think this whole idea of postponing for five years is madness,” said the Fianna Fáil leader, who rejected arguments that RTÉ could solve its financial crisis by land sales as “short-term stuff”.

However, RTÉ director general Dee Forbes said the station’s radio centre will be moved elsewhere on the Montrose campus and the land sold – in a move that could raise €50 million.

The broadcaster expects to seek permission from Government to sell another tract of land as soon as next year. In 2017, RTÉ sold a section of land near the radio centre for €107.5 million.

A move away from Montrose made no economic sense because of the cost of lands elsewhere and the cost of replicating infrastructure: “We cannot afford to move off-site,” said Forbes.

RTÉ is also expected to ask the Government for more flexibility on the rules governing the timing of advertising breaks within specific time periods, it is understood.

The broadcaster has indicated that pay for most staff will be frozen rather than cut, but management wants to cut spending on overtime, shift benefits and other allowances.

Talks with unions will begin next week, but unions insist that management never followed through on reforms agreed in 2012. Siptu has said it would oppose any compulsory redundancies.