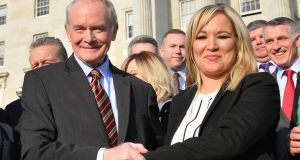 Stormont has a third woman leader of a Northern Ireland political party. There was great fanfare at Parliament Buildings on Monday when Gerry Adams confirmed Michelle O’Neill as the new Sinn Féin leader in the North.

The Clonoe, Co Tyrone politician now joins Arlene Foster, leader of the DUP, and Naomi Long, who heads the Alliance party, as the third female political leader in the North. Of the three of them, Foster is under the greatest pressure.

As the current Assembly, in its last days, tries to address the Renewable Heat Incentive (RHI) scheme debacle, the DUP remains shaken and uncertain in the face of the forthcoming election.

Sinn Féiners were in bullish and ebullient mood at Stormont. Gerry Adams and Mary Lou McDonald came from Dublin for the inauguration of O’Neill. That raised thoughts of another woman in line for promotion when the Sinn Féin president finally calls it a day – McDonald appeared like a Southern leader in waiting.

Martin McGuinness, still weak-voiced but looking in better shape, came from Derry to give his successor his blessing.

And as a very happy O’Neill went to the podium to assure McGuinness and Sinn Féin generally that “I will not let you down”, one also couldn’t help wondering how the party MLA for Fermanagh South Tyrone, Michelle Gildernew, felt about the Tyrone woman’s elevation. For a long time Gildernew was the coming woman in Sinn Féin but in that curious, ruthless way the party does business she was deleted from the leadership script.

After the appointment the group of Sinn Féiners trooped down the stairs of Parliament Buildings past a couple of DUP MLAs looking the other way, out through the great hall and down the steps of Stormont for a group picture in the chilly sunshine.

Roll on the election, was the message. What can go wrong?

It triggered a memory in the Alliance leader of DUP chief Arlene Foster recently complaining of misogynistic attacks on her following from the “cash for ash” fiasco. “Pretty sexist & misogynistic suggesting” O’Neill “isn’t a serious leader”, Long tweeted, while mock-speculating that Foster “can’t be happy with that as a party response surely”.

And just to create further misery for the DUP, Jonathan Bell, the former DUP minister whose BBC interview on RHI helped to create this crisis, used the privilege of the Assembly to create more trouble. He suggested Foster’s chief special adviser Timothy Johnston had a brother whose job was installing wood-pellet boilers under the RHI scheme.

This prompted the necessity of the DUP press office putting out a release stating Johnston’s brother “does not, nor never has installed boilers, does not work in this sector and has not been involved in any RHI issues whatsoever”.

That denial seemed very emphatic, but just having to put out such a response must add to the misery at headquarters. When you are explaining, and denying, you are losing.

Every day the DUP has a fire to extinguish. How can it prepare for an election in such circumstances?

Otherwise, Monday was Michelle O’Neill’s day, although Martin McGuinness stole just a little of her thunder. The Sinn Féin faithful accorded him a rapturous reception when he appeared in the Long Gallery of Parliament Buildings to pass on the baton to O’Neill.

McGuinness said he was just standing down from the Foyle constituency and not retreating from politics. “I have not gone away, you know,” he insisted.

It was a proud day for the O’Neills. The new Sinn Féin Northern leader was joined by her mother Kathleen, her 23-year-old daughter Saoirse and her 19-year-old son Ryan for the inauguration.

Her late father Brendan Doris, a former IRA prisoner and Sinn Féin councillor, had encouraged her into politics. In 2005 she was elected to his former seat on Dungannon and South Tyrone Borough Council, and it has been onwards and upwards thereafter to the Northern Assembly, the Department of Agriculture, the Department of Health, and now the leadership of Sinn Féin in Northern Ireland.

Should the Assembly actually return some time after the March 2nd elections, she would be elected deputy first minister if Sinn Féin emerges again as the second-largest party. If it has more seats than the DUP she could be joint first minister.