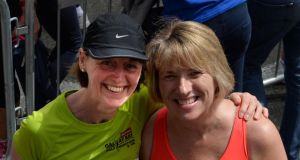 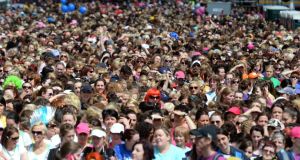 It’s not often Irish people express relief that the sun didn’t appear - but it was music to the ears of the 40,000 women undertaking the Flora Women’s Mini Marathon in Dublin today.

The runners and joggers crossed the start line at about 2pm, but it took almost 45 minutes for the many thousands of walkers- who made up almost three quarters of those taking part in the event - to get across the line due to the sheer volume of participants.

Each time a group passed under the yellow gates which marked the start of their personal mini-marathon, another squeal was heard from enthusiastic participants.

By the time they had all crossed the line, however, the winners had already finished: Barbara Cleary from the Donore Harriers club got in in 34 minutes and 7 seconds.

Second place went to Dublin’s Maria McCambridge, who crossed the line in 34 minutes 29 seconds, while Catherina McKiernan of Analee Athletic club in Cavan got a time of 34:38.

From midday, women had been gathering in Dublin city centre, many in uniformed groups supporting a myriad of charities: Goal, the Alzheimer’s Society, Laura Lynn, St Luke’s Hospital, the Ichthyosis Support Group, Pieta House, Barnardos, the Irish Heart Foundation, Dóchas, Our Lady’s Hospice, the Rape Crisis Centres ...the sheer volume of good causes appeared unending, as was the feeling of goodwill on Dublin’s streets today.

Kathleen Tierney from Cavan was walking to raise funds for Temple Street Children’s Hospital, where her daughter Lorna, now 15, had a kidney transplant almost exactly four years ago.

“This is an anniversary really. While she was in Temple Street I remember looking out the window at all these women walking and running and I thought, I am going to do that every year that I can - and hence that’s why we’re here,” she said, adding that Lorna, who is doing her Junior Certificate this year, would be joining next year’s event.

“It’s wonderful that she has had the gift of being able to live a normal life...so I decided to come here as a big thank you to Temple Street,” she said.

For some taking part, the event is deeply personal. Louise Keeley was out in support of the Irish Premature Babies in memory of her nephew Justin, who died on January 19th last.

“It’s a charity very close to our hearts,” she said. “His mother and father are here, his aunties, his uncles, his grandmother, friends,” she said, adding that by raising money the family hopes to help other families like them. They have raised over €1,000 to date.

Maureen Armstrong, who is 89 and from Upperchurch, Tipperary, is now a mini-marathon superstar having taken part in her 20th Dublin mini-marathon today. “I started doing it because I’d retired from farming...and I’m delighted I did start it,” she said.

Ms Armstrong, who was fundraising for the Irish Cancer Society, estimates that she has raised thousands for the charity over the years.

“Every family is hit with cancer, every home...so I hope to God it will do somebody some good what money I have raised so far,” she said, adding that she expected to raise €600 for this year’s event.

“I don’t ask anyone at all, they all come to me. The neighbours are fabulous altogether, they couldn’t be better,” she said.

Over the years she has recruited more and more of her female family members: today she was joined by her daughters Martina and Marian and granddaughter Sinead - although last year there were four generations when Sinead took her three children along.

The mini-marathon is the biggest women-only sporting event in the world, and its appeal is as enduring now as it has been at any time since the race was first held in 1983. Some men dressed up as women also take part.

Runners were first out of the starting blocks, although they make up just 5 per cent of the field - with people classified as joggers accounting for a further 30 per cent.

Participants who have signed up to walk the 10km account for the majority of those taking part, with 65 per cent falling into this category.

Run, jog or walk, the big winners will be the more than 700 charities who look set to benefit to the tune of about €12 million.

Last year’s event was won by Siobhan O’Doherty from Tipperary, who ran it in about 34 minutes.

A challenge of a different level faced about 9,000 people taking part in the Cork City marathon and half marathons today. The marathon and team relay started at 9am with the wheelchair marathon starting a couple of minutes before that. The half marathon got under way at 10.45am.

Cork firefighter Alex O’Shea set a new Guinness World Record today for running a marathon in full firefighting gear in a time of 3:41:10. In the feat, Alex shaved 58 minutes off the previous record set at the London Marathon earlier this year.

He had to wear steel-toed reinforced firefighting boots, fire-retardant pants and jacket, as well as his 3lb firefighter’s helmet and visor to set the record.

Irish Olympian Pauline Curley, who also won the women’s event last year, set a new course record for the Cork marathon with a time of 2:43:47.

Bartosz Muzerski, who also won the men’s event last year, won the marathon in a time of 2:28:38.

l The first 10 past the line in the Flora Women’s Mini Marathon 2014 in Dublin was as follows: