Man (21) charged after allegedly shooting at gardaí in Cork 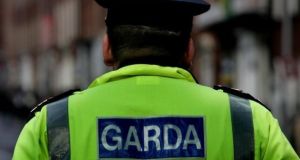 The incident appears to have been triggered by a domestic incident on Military Road on Cork’s northside at about 11.40pm on Friday night. File photograph: Eric Luke

A 21-year-old man is due to appear in court in Cork on Monday morning after gardaí say he shot at them with a handgun and injured a uniformed officer.

He was arrested on the main Cork-Dublin motorway following a near 30km chase.

The man, originally from Mallow in north Cork, is due to appear at Cork District Court on firearms, endangerment and car theft charges following the 30 minute-long chase which started in Cork city and ended near Fermoy when members of the Armed Support Unit tasered him.

Gardaí recovered a firearm at the scene near Curraghprevin, between Rathcormac and Fermoy, and it has been sent to the Garda Ballistics Unit for a technical examination. Gardaí are also carrying out an examination of the vehicle to see whether or not the man may have had a second weapon.

The incident appears to have begun following a domestic incident on Military Road on Cork’s northside at around 11.40pm on Friday night. The man is accused of firing a number of shots from a handgun at his estranged partner’s flat before gardaí arrived at the scene.

The man was brought to Cork University Hospital for treatment for some head and other injuries sustained in the car crash before being discharged on Saturday afternoon.

He is being held at Fermoy Garda station under section 30 of the Offences Against the State Act.