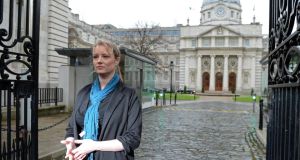 Maíria Cahill: said it was “grotesque” for people central to the allegations to be issuing a “drip feed” of statements. Photograph: Eric Luke

Briege Wright, one of four republicans accused of subjecting Maíria Cahill to an “interrogation” over her sexual abuse allegations, has claimed that letters she received from Ms Cahill demonstrated she was trying to help the alleged rape victim.

Ms Wright through her Belfast solicitors, Madden and Finucane, on Tuesday released “significant letters” she said she received from Ms Cahill in 2005 and 2008.

Ms Cahill responded last night by claiming it was “grotesque” for people central to the allegations to be issuing a “drip feed” of statements that was causing stress and confusion.

Ms Cahill said she is now “seriously considering” taking a civil case against four republicans allegedly involved in questioning her about her allegations, and also against Sinn Féin president Gerry Adams.

“I know such a case would be very costly but it might be the only way of getting some true answers. Gerry Adams would be included in any civil action I might take,” she said.

Ms Wright, together with former IRA prisoner Padraic Wilson, Séamus Finucane – brother of murdered Belfast solicitor, Pat Finucane – and Maura McCrory were accused of conducting an internal IRA inquiry into Ms Cahill’s allegation that she had been raped by another Belfast republican Martin Morris.

Ms Cahill has said that she was subjected to what was tantamount to a “kangaroo court” by the IRA over several months from 1999 into 2000, and that she was also forced by them to come face-to-face with her alleged abuser.

Ms Wright in her statement said that “there has been a deluge of inaccurate, prejudiced and selective reporting of all aspects of this case, particularly my relationship with Maíria Cahill and in terms of the support that I offered her”.

“My intent was to try to help Maíria. I believe that these letters demonstrate that Maíria accepted and valued that support,” said Ms Wright.

“My legal team would have questioned her about these letters had there been a trial.”

cIn the letter from 2005 Ms Cahill described Ms Wright as “the only one from that time that I trusted and for me to trust anyone after everything that has happened to me is a major thing.

“You mean the world to me, you are kind, compassionate, committed and above all you gave me an ear when I needed it.”

Ms Cahill signed off that letter “thanks a million Briege for helping me just by being you”.

In the letter from Christmas 2008 Ms Cahill is friendly towards Ms Wright, saying it would be “good to see you”.