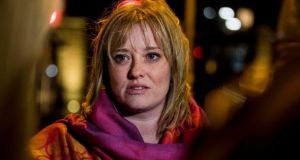 Máiría Cahill said there are “concerns around my safety” and that there is a “court order in place in order to try and protect myself and my daughter”. Photograph: Liam McBurney/PA Wire

Máiría Cahill, SDLP councillor and sex abuse survivor, has been forced to pull out of local elections in the North over fears for her safety.

The former Labour senator, who had been co-opted onto Lisburn and Castlereagh Council, said the local government legislation does not allow her to stand in the upcoming polls without publishing her home address.

Ms Cahill said there are “concerns around my safety” and that there is a “court order in place in order to try and protect myself and my daughter”.

“So obviously I wasn’t able to put my home address on a form because that form would then become publicly available, printed on the ballot papers, anyone can search it through it in the public records office,” she said.

“It just wasn’t an option for me.”

Ms Cahill alleged to police in 2010 she had been raped by an IRA man from 1997 to 1998, and said she was later subjected to an IRA “kangaroo court” investigation.

Had she been standing for the Assembly or as a Westminster candidate her home address would not have been an issue, because the law has been changed to protect such candidates. But the law was never extended to cover local government.

“Which means we are now in the farcical situation where my posters are up on the lamp post, we’ve distributed 5,000 leaflets, spent money on the campaign, and at the very last minute, because the deadline is on Monday, I’ve no other option but to pull out of the race and I think that is quite disgraceful,” she told RTÉ Radio One.

Meanwhile, SDLP leader Colum Eastwood said it was a “disgrace that a victim whose safety would be jeopardised by publication of her address is not afforded the same protection in a local government election that every Assembly and Westminster candidate can avail of”.

He added: “We have raised our very serious concerns with the Chief Electoral Officer and we will be contacting the Secretary of State about this unacceptable oversight. These rules effectively bar anyone under threat, including victims of domestic violence, from running for local government. That is intolerable.

“We would never ask Máiría to compromise her safety or the safety of her family for an election. Some things are more important. We’ll continue to work hard to resolve this issue and to support Máiría in any way we can,” said Mr Eastwood.

The SDLP Lagan Valley MLA Pat Catney said he could not “believe that an outstanding local councillor is being forced to choose between the safety of her family and delivering for her community”.

“It’s wrong and the Northern Ireland Office should change the law immediately,” he said.