‘Seconds can change your life’ says Transdev in latest appeal to motorists, cyclists and pedestrians

Transdev, operators of Dublin's Luas tram system, has released footage of a series of near misses between Luas trams and pedestrians, cyclists and motorists. Video: Transdev Ireland 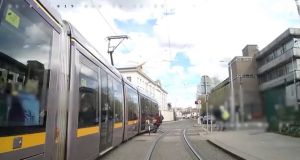 Footage from Luas operator showing clash with a bike

“Seconds can change your life is the message from Luas operator Transdev as it relaunched an appeal to motorists, pedestrians, and cyclists to be aware of the danger of crossing onto the tram tracks.

Transdev says Luas trams travelled on a fixed track and cannot swerve, they take time to break and stop, and coming into contact with a tram can result in a serious injury or fatality.

Among the incidents reported by drivers are pedestrians jaywalking, not looking left and right, often with headphones in and heads down, motorists and cyclists breaking red lights.

Up to April this year there were two fatal collisions involving Luas and pedestrians and seven contacts with pedestrian in total. Luas had 14 contacts with vehicles (one resulted in the tram derailing).

On the 15th anniversary of the reintroduction of trams into Dublin City the tram system continues to grow with 42 million passenger journeys made on its network in 2018.

Séamus Egan, Managing Director of Transdev said the problem was that people had become familiar with Luas “and with familiarity sometimes comes complacency”.

He said motorists “who often visibly speed up to cross a road junction as opposed to slowing down, need to be more mindful of the potential consequences of their actions”.

“Not only is the motorist gambling with his or her life and the lives of others, a collision with a tram results in significant delays to, or curtailment of service for Luas customers. When a collision with a tram does occur, Luas passengers are left waiting for the emergency services to deal with the incident before the all-clear can be given for the Luas service to resume”, he said.