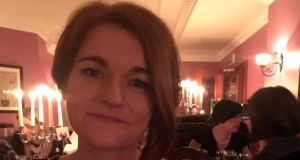 Ní Fhiannachta recently directed Eipic for TG4, a critically acclaimed fast-paced teenage musical drama, which marked her out as an exceptionally creative and inventive new force in television.

Also at the event, veteran Irish Times journalist Mary Maher was awarded the Mary Cummins Award for Women of Outstanding Achievement in the Media.

Olivia O’Leary presented the award to Maher which was accepted on her behalf by Miriam O’Callaghan.

O’Leary paid tribute to Maher as a woman who paved the way for women journalists in Ireland, and brought with her an original copy of the landmark Women’s Liberation Movement feminist manifesto Change Or Chains to show those gathered the various elements of Irish society Maher had an impact on, from the Contraceptive Train to being the first Woman’s Page editor of the Irish Times.

On Saturday afternoon, the Irish Times Women’s Podcast hosted a live podcast recording titled The Producers, with a panel of television, film, and current affairs producers including Katie Holly, the managing director of Blinder films, producer of Charlie and Rebellion Catherine Magee, and producer of Claire Byrne Live Aoife Stokes.

The discussion was hosted by Dr Aoibhinn Ní Shúilleabháin. During the discussion, Magee revealed that filming for a second series of Rebellion focusing on the War of Independence will begin this autumn.

Holly, who is also a member of the Irish Film Board, spoke about the IFB’s six point plan on gender equality, and cited the Swedish film board’s approach to implementing gender parity across funding, something which has seen Swedish film box office figures rise.

Stokes spoke about the sexism she has experienced while working in the media, including being “slapped on the arse” and “being addressed in derogatory language”, but also of how she has found men in the workplace helpful in terms of mentoring women colleagues.

On Friday, Tánaiste Joan Burton delivered a frank speech about sexism women politicians face, especially during election campaigns, and criticised tech companies for being “cavalier” with regards to the responsibility they have to victims of abuse and hate online.

She also criticised The Late Late Show for what she called a “vulgar, crude and demeaning” segment during the general election about the body language and gestures of politicians.

Burton recalled that an analyst on the programme, Dr Peter Collett, “made some remarks about my lip gestures” and interpreted it as a sign of “early childhood rejection”, which was especially insensitive to Burton as an adopted person.

Mary Harney closed the conference on Sunday afternoon, saying the gathering in Kerry was a great opportunity for younger journalists to meet an older generation of journalists and politicians and vice versa.

The former tánaiste said that the conference now has a chance to celebrate its successful four-year run, and to reflect on expanding.

Referencing the current situation, Ms Harney said while she was reluctant to speak about the current political situation as “when you leave whatever career you’re in, you leave it to those who are there,” she said the general election has thrown up “complexities” and that it was important for Ireland and the country’s reputation to form a government.

She also spoke about the importance of having women included in decision-making in general, saying, “Decision-making is better when you have a diverse group of people making the decisions . . . We must remember we’re working with men, not against men. It’s women and men working together.”