Lord Puttnam: Politicians must ensure RTÉ is funded to serve its purpose 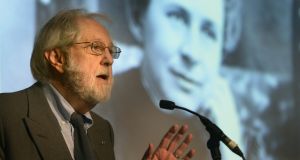 Politicians should set aside any personal views on RTÉ and seek to ensure it is properly funded as having an independent public service broadcaster is essential to democracy, Bafta Award-winning film producer David Puttnam has said.

Lord Puttnam, who chaired a review of British public service broadcasting in the UK in 2016, said properly funding the sector was essential as “a trusted source of information” was needed more now than ever.

“In an era of fake news, alternative facts and online trolls, our public service broadcasters stand as guarantors of accurate, informed and impartial information,” he told The Irish Times.

Lord Puttnam said effective public service broadcasters are the most reliable bulwark available in the battle against ill-informed populism and market totalitarianism.

“The truly successful societies of the 21st century are likely to be those in which the provision of news is rapid, accurate and trusted,” he said. “Rapidity is now a given, accuracy remains a challenge and trust is proving increasingly elusive.”

Lord Puttnam, who produced films including Chariots of Fire, said the fear was that trust in the media “is evaporating on a daily basis and, once shredded, could prove all but impossible to rebuild”.

However, he said people in Ireland, including him and his wife, Patsy, relied on RTÉ for reliable updates when Storm Ophelia battered the country and their home in Skibbereen, Co Cork in October 2017.

He said that building a reliable and trusted public service broadcaster requires investment and that politicians need to ensure that RTÉ is properly equipped to do the job it is supposed to.

“The problem I found is that when I spoke to TDs about RTÉ, they tended to bring the discussion around to some personal experience where they were ignored or criticised rather than seeing it in terms of a national obligation,” he said. “Creating an objective media by definition means being objective, it requires politicians to step above that and see that to sustain democracy and the flow of information and trust. They have got to look outside of themselves.”

Lord Puttnam said he had been following with interest the current debate about RTÉ and its need to cut its costs by some €60 million over the next three years amid suggestions that the licence fee funding model is no longer viable.

“It’s dangerous to shoot from the hip but I come from a 1960s generation which would immediately look at placing a levy on the dominant digital companies in order to ensure the public sphere was adequately funded,” he said.

He said he had great respect for RTÉ director general Dee Forbes and its chair Moya Doherty and would seriously consider a suggestion by the latter that he chair a review of public service broadcasting in the State.

Lord Puttnam said he would be willing to get involved in such a project if he felt the main political parties, in commissioning such a review, were genuinely committed to ensuring a well funded system arises at the end.

“It would be a dereliction of duty not to get involved though the danger is that you either become a delaying factor or else a fig leaf, so you need to know the people asking you to do the job are determined to come up with the result,” he said.

“I would do anything to try and ensure what I see as democratic values are sustained and for me, a genuinely free media and a trusted public square, like RTÉ, is actually fundamental to the Ireland that I love.”