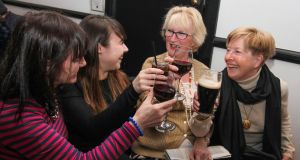 Mother and daughter Marlene and Sarah-Jane Rowe, from Limerick, with Anna Kelly (Kerry) and Aileen Long (Dublin) at the London Irish Centre for the celebration of Terry Wogan’s life. Photograph: Joanne O’Brien

Irish people gathered in London on Wednesday night to toast the late Terry Wogan at a special event in the Irish Centre in Camden.

Wogan, who died last weekend, was a longstanding supporter of the centre where he was first involved in a fundraising event in 1968.

Gary Dunne, the centre’s director of arts , said it was becoming obvious this week the Irish community in London wanted to show their respects.

“Our job is to be responsive to the community, and we announced our ‘Toast for Terry Wogan’ just 24 hours ago. No one knew how many would turn up but I am delighted by the turnout,” he said.

Eileen O’Sullivan, from Leitrim, remembered when she firstwent to Britain in the 1970s. “I could listen to Wogan and it made it easier to be Irish in Britain.”

Her daughter Anne-Marie O’Sullivan recalled the only time Wogan seemed lost for words: “It was the first Riverdance performance in the Eurovision Song Contest. He was amazed and later said he was never more proud to be Irish. You didn’t need to know him personally to feel his warmth and closeness.”

Marsha Zuniga and her grandmother Doreen Murphy have no family connection to Ireland, but they made the journey from south London. “Terry was part of my childhood and he became part of my family, part of us. When we heard about today we had to come.”

Declan Molyneux, from Dublin, said he was a Tog, a Terry’s Old Geezer, who listened to his breakfast radio show. He has been in England 50 years and felt Wogan was important as a link between Ireland and Britain.

“In a gentle way, he taught the British about Ireland and the Irish about Britain. He was a link to home and a great unpaid ambassador”.

Anna Kelly recalled the first time she saw Wogan on TV. “Back home we didn’t have televisions and all the neighbours gathered in the church hall to watch his RTÉ programme. When I first saw him I thought he was lovely, the bee’s knees, and I still do!”

Irish ambassador Dan Mulhall spoke about appreciating the importance of Wogan to the Irish community during difficult times.

As well as the “toast to Terry Wogan”, the centre on Wednesday hosted a pensioners’ dinner, a tea dance and the first poetry evening of the London Irish LGBT group. It demonstrated the diversity of needs of the Irish community. Wogan, with his warm interest in people, would have wanted to go to all of them.