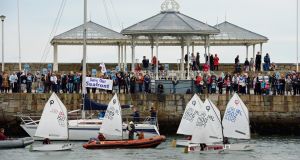 An “alternative vision” for the future of Dún Laoghaire Harbour sees the port developing as a maritime park with a national watersports centre attracting school visits and competitions from Ireland and world-wide.

A Bord Pleanála inquiry is expected to be told this week that the alternative vision represents a more sustainable use of the harbour than Dún Laoghaire Harbour Company’s ambition to accommodate large cruise ships .

Proposals on the alternative vision reflecting the views of the six sailing and yacht clubs based in the harbour, as well as the campaign group Save our Seafront have been submitted to the planning inquiry and are expected to be discussed on Tuesday.

The submission points to similar successful developments including the Welsh National Sailing Academy and Events Centre at Pwllheli, north Wales, as well as the Weymouth and Portland National Sailing Academy in England. The submission argues the “skilled event leadership and management” are already in place in Dún Laoghaire to run such events, which it says could contribute significantly to the local economy.

The clubs’ submission lists 10 national and world-level championships scheduled to take place at Dún Laoghaire by 2022, including Youth Olympics events that year.

Long-time sailor at the Harbour Liam Shanahan said the proposal, within a national maritime park, could give the State a renewed role in sail and watersport training , with schools using the harbour for children on marine themed courses, spreading the use of the harbour “beyond just yachties”.

Campaign group Save our Seafront has also made submissions on “an alternative vision for Dún Laoghaire Harbour with broadly similar concepts.