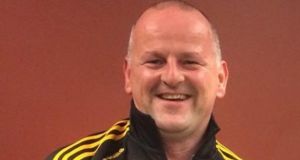 A team of former Liverpool football players are to visit Dublin for an exhibition match in aid of Seán Cox, the Co Meath man who was badly injured during a trip to watch the club play in 2017.

A team of Liverpool ‘legends’ is to visit Dublin for an exhibition soccer match in aid of Seán Cox, the Co Meath man who was catastrophically injured during a trip to watch the club play last year.

The team face a Republic of Ireland selection at the Aviva Stadium on April 12th, with money raised from the fixture going to the Seán Cox Rehabilitation Trust.

Mr Cox, from Dunboyne, was assaulted in Liverpool by a Roma fan in the run up to a Champions League game at Anfield in April. The father-of-three fell outside a pub close to the stadium after being struck in the head.

His wife Martina said in November that Mr Cox, a lifelong Liverpool fan, was making good progress and could recognise family members but was still unable to talk, walk or sit up without help. She said last month that the Support Seán campaign had raised more than €1.1 million.

“It’s going to be a very long and slow process for Seán’s recovery and I’d like to thank the overwhelming support that Liverpool fans have shown,” she said.

“I’d also like to thank the club, players and those former players who will be playing in the match for their continued support. We are also working with LFC on a number of other initiatives that will help to support Sean’s care in the years ahead.”

The Irish team will be headed by the international side’s manager Mick McCarthy.

Peter Moore, chief executive of Liverpool FC, said the club was behind Mr Cox and his family and hoped the game would raise “vital” funds.

Italian national Filippo Lombardi (21) was jailed for three years for violent disorder last October over the incident although he was cleared of inflicting grievous bodily harm.