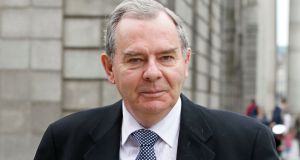 Legal moves to seize two company cars that belong to Quinn Industrial Holdings, but were used by Seán Quinn*, are thought to be unlikely as the company wants to avoid a local backlash.

It is understood that the two cars, a Range Rover and an Audi A6, are several years old.

The Range Rover is believe to have been provided for Seán Quinn snr by the Quinn Group before its collapse, liquidation and re-emergence as QIH.

The new directors of QIH, who have been involved in a bitter row with Mr Quinn and his supporters over his role at the group, are keen to avoid sparking a backlash among the local community by instigating a legal action over the vehicles.

The preference of QIH, the group said in a statement, is to “regularise” the ownership of the cars. This would most likely be achieved by a sale to Mr Quinn, or at the very least, his assumption of tax payments and insurance policies for the two cars.

The Quinns’ continued use of the two cars was first reported in the Sunday Times and Sunday Independent newspapers.

In a statement, QIH said that the use of the two cars was agreed during the period of a “consultancy agreement” which saw Mr Quinn snr paid a salary of €500,000 a year, and his son Seán jnr €100,000, by a group of US investors in the former Quinn group of companies.

However, this arrangement collapsed after it emerged that Mr Quinn wanted to ultimately regain control of the companies.

“All such company property was to have been returned when the agreement ended but this did not occur. As the cars are still registered in the name of QIH, they were taxed and insured under a fleet policy for a period, but this is expected to be regularised,” a spokesman for the group said.

It is understood that the QIH directors believe any move to repossess the cars would be poorly received by the local community in and around the Border towns where QIH’s base is, and whose support they view as vital to the company’s survival.

A source said a legal move risked being viewed as petty.

QIH has made a written request for the return of the vehicles.

The Range Rover is reported to be used frequently by Seán Quinn snr, who is often seen driving it in Cavan and Fermanagh.

This article was amended on December 2nd, 2019 to note that the cars were used only by Seán Quinn