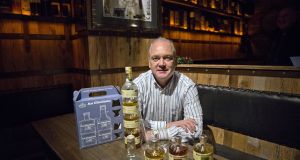 Oliver Hughes, one of Ireland’s leading publicans and the owner of both Lillie’s Bordello and the Dingle Whiskery Distillery, has died.

It is understood he passed away suddenly at his home in Dublin on Saturday night after suffering a suspected heart attack.

The publican, who was 55-years-old, had been treated for a heart condition in recent weeks but had been given the all clear by doctors and was convalescing at his home on Saturday night when he was taken ill.

He is survived by his wife and two children.

Hughes worked as a barrister for spell, but shot to national prominence after he co-founded the Porterhouse group - along with his cousin Liam La Hart. Set up more than 25 years ago, the group now employs over 500 people across its pub network in Dublin, London and New York.

Hughes and his cousin bought a pub in Bray in 1989 which specialised in stocking world beers and in 1996 they opened their first pub micro-brewery in Dublin’s Temple Bar which continues to thrive under the Porterhouse name.

Three years later the company opened a Porterhouse in Covent Garden and then another in Glasnevin.

More than 10 years ago Hughes and his co-founder bought one of Ireland’s most famous nightclubs Lillie’s Bordello and opened Porterhouse Central on Nassau Street.

It also has an operation in New York city.

Most recently much of Hughes’ energies were focused on the opening of the Dingle Whiskey Distillery and he took great pride in opening the first purpose built distillery for whiskey in Ireland for over 200 years.

The distillery’s first batch of whiskey was only bottled less than eight months ago.

The Porterhouse chain celebrated its 20th anniversary in May and when it first opened Hughes and LaHart were “regarded as complete eccentrics,” he recalled in an interview with this newspaper published last month.

Back then it was unheard of to walk into a pub in Ireland and find anything other than the usual mainstream beers on offer. “Nobody said it would last, but here we are 20 years later.”