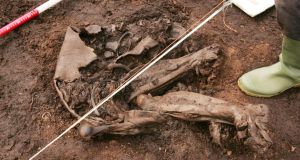 The bog body found by Jason Phelan at the Bord Na Mona Cashel Bog, in Co Laois. The body is estimated to be over 4,000 years old, and is possibly the result of a human sacrifice. Photograph: Alan Betson/The Irish Times.

The mummified remains of a body found in a Laois bog two years ago have been found to date back to 2,000BC, making it the oldest “bog body” discovered anywhere in the world.

The 4,000-year-old remains, which predate the famed Egyptian pharaoh Tutankhamun by nearly 700 years, are those of a young adult male.

He is believed to have met a violent death in some sort of ritual sacrifice.

The body was unearthed in the Cúl na Móna bog in Cashel in 2011 by a Bord na Móna worker operating a milling machine.

Initially, experts thought it dated from the Iron Age period (500BC-400AD), placing it on a par with similar finds in other Irish bogs.

However, radiocarbon tests on the body; the peat on which the body was lying; and a wooden stake found with the body, date the body to the early Bronze Age, around 2,000BC.

The discovery promises to open a new chapter in the archaeological record of Bronze Age burial in Ireland.

Eamonn Kelly, keeper of Irish antiquities at the National Museum of Ireland, said previously the earliest bog body discovered in Ireland dated to around 1,300BC but “Cashel man” substantially predates this period, making one of the most significant finds in recent times.

He said the remains are those of a young adult male which were placed in a crouched position and covered by peat, probably on the surface of the bog.

The man’s arm was broken by a blow and there were deep cuts to his back which appear to have been inflicted by a blade, which indicate a violent death, Mr Kelly said.

Unfortunately, the areas that would typically be targeted in a violent assault, namely the head, neck and chest, were damaged by the milling machine when the body was discovered, making it impossible to determine the exact cause of death.

Nonetheless, Mr Kelly believes the wounds on the body, combined with the fact that it was marked by wooden stakes and placed in proximity to an inauguration site, point to the individual being the victim of a ritual sacrifice.

“It seems to be same type of ritual that we’ve observed in later Iron Age finds. What’s surprising here is that it’s so much earlier.”

Because of the lack of calluses on the hands and the well-groomed fingernails observed in other finds, though not this one as the hands were not recoverable, Mr Kelly suggests the victims were most likely “high-born”.

“We believe that the victims of these ritual killings are kings that have failed in their kingship and have been sacrificed as a consequence.”

The museum is awaiting further test results on samples taken from the man’s bowel which should reveal the contents of the meal he was likely to have consumed before he died.

The chemical composition of bogs can preserve human bodies for thousands of years.

Archaelogists have discovered more than 100 ancient bodies in Irish bogs but few as well-preserved as “Cashel man”.