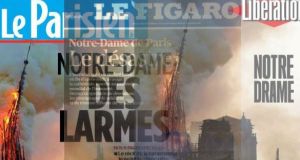 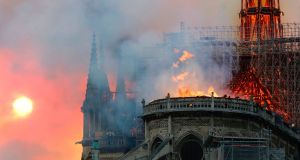 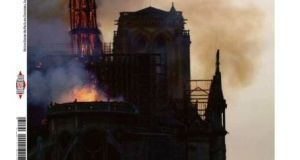 The fire at the Notre Dame cathedral in Paris on Monday night features prominently across the front pages of newspapers in France and worldwide on Tuesday.

The French Roman Catholic newspaper La Croix carries a picture of the burning cathedral with the headline “Le Coeur en cendres”, which translates to “heart in ashes” on its front page. The daily newspaper Libération leads with a similar image and the headline “Notre Drame”.

The New York Times front page says “Fire Mauls Paris’s Beloved Notre-Dame” along with a picture of the cathedral.

“Notre Dame has occupied the heart of Paris for the better part of a millennium, its twin medieval towers rising from the small central island wedged between the storied left and right banks,” journalist Michael Kimmelman writes. “Now France is burning.”

The Daily Telegraph’s front page says: “Paris weeps for its beloved lady” with images of the cathedral and Parisians gathered on the streets on Monday night.

“The heart of Paris was torn asunder last night as a fire ripped through Notre-Dame cathedral and gutted the much loved historic monument,” writes Henry Samuel in Paris.

The Sun’s page one goes with “Notre Doom”, while the Daily Mail’s headline says: “Nine centuries of history lost to the unholy inferno”, with both newspapers leading with images of the cathedral in flames.

The Independent also carries a picture of the burning cathedral and the headline “Notre Dame in flames”. “Nine centuries of history brought crashing down in just 63 minutes,” it says.

The Scotsman leads with a picture of the burning cathedral and the headline: “La tragédie de Notre Dame”.