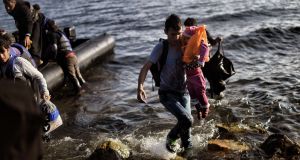 The Naval Service patrol ship LÉ Samuel Beckett has rescued 242 people off the Libyan coast on its first humanitarian tasking in the Mediterranean.

The ship, which took over from the LÉ Niamh last week, located a wooden craft with 237 men and five women on board about 80 km north-west of Tripoli around 8am Irish time on Monday.

The overloaded craft had been sighted at 3am by an Italian naval helicopter, and the Italian Marine Rescue Co-ordination Centre directed a number of ships to the area, including the LÉ Samuel Beckett and the British naval sevice ship HMS Enterprise.

The ship under the command of Lieut Cdr Anthony Geraghty provided those rescued with food, water and medical attention, and remained in the area for a time to offer further assistance.

The LÉ Samuel Beckett was also involved in taking a transfer of about 200 migrants from an Italian navy vessel north of Libya, and was expected to be directed to a port of safety in Sicily.

It is the third Naval Service patrol ship to be deployed on Operation Pontus under a bilaterial agreement with the Italian government, which is not part of the EU Triton’s mission in the Mediterranean. It is expected to remain in the area until the end of November or early December.

The LÉ Eithne and LÉ Niamh rescued a total of 7,397 men, women and children during their respective missions.