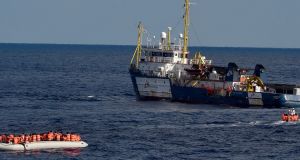 The Naval Service patrol ship the LÉ Samuel Beckett has rescued 100 migrants in the Mediterranean near Tripoli in Libya, according to reports.

The rescued migrants are said to include 29 women, three of whom are pregnant.

The rescue occurred about 87 km northeast of the Libyan coast at 8.15 am on Wednesday morning.

The rescue effort was a joint operation with an Italian vessel, the ITN Aliseo, and the MV Dignity 1, a Médecins Sans Frontières ship.

A spokesman for Médecins Sans Frontières said that all of those rescued in the operation were from Somalia.

A spokesperson for the Defence Forces said that the LÉ Samuel Beckett remains in the patrol area.

The LÉ Samuel Beckett has been in the Mediterranean since October last, after replacing the LÉ Niamh in humanitarian search and rescue efforts in the region.

It is the third Naval Service patrol ship to be deployed to the Mediterranean as part of Operation Pontus, which aims to rescue migrants attempting to cross the sea from north Africa.

It is expected to remain in the area until the end of November or early December.

The LÉ Samuel Beckett has rescued 562 people since its deployment in October.

The LÉ Eithne and LÉ Niamh rescued a total of 7,397 men, women and children during their respective missions.