Many migrants in water and rescue efforts by several ships under way, Navy reports 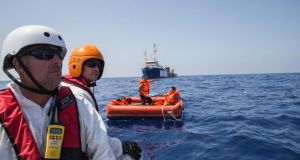 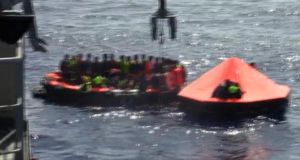 It is believed there were 600 people on board the ship when the LÉ Niamh arrived at the scene at 11.45am.

A statement from the Defence Forces Press Office said two rhibs (rigid hull inflatable boats) were deployed either side of the vessel, “as per standard operating procedure, however the vessel capsized. The LÉ Niamh immediately deployed all available assets including rhibs and life rafts.”

“ The Italian vessel the Mimbelli sent a helicopter to the scene to deploy additional life rafts and two further vessels, the Italian Sirio and Médecins Sans Frontières Dignity 1 are on site assisting with the efforts.

“It can now be confirmed that 367 rescued people are on board (342 male, 12 female and 13 children) the LÉ Niamh and 25 bodies have also been recovered. The operation is ongoing.”

Officials have yet to determine what caused the capsizing.

The vessel reportedly left from the city of Zuwara in the northwest of Libya early on Wednesday morning.

The LÉ Niamh has been carrying out rescue and recovery operations in the Mediterranean in recent weeks.

The Irish Naval vessel, under the command of Lieut Cdr Daniel Wall, had rescued 1,280 migrants up to last Tuesday since taking over from the LÉ Eithne in the Mediterranean earlier this month.

The Mediterranean Sea has become the world’s most deadly border area for immigrants.

More than 2,000 migrants and refugees have died so far this year in attempts to reach Europe by boat, compared with 3,279 deaths during the whole of last year, the International Organization for Migration said on Tuesday.