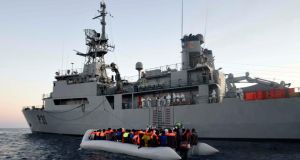 A rescue operation being conducted by the crew of the LÉ Eithne in the Mediterranean Sea in June 2015. Photograph: Irish Defence Forces 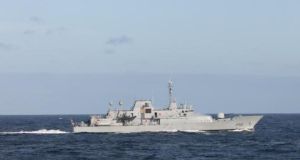 Naval Service patrol ship LÉ Niamh has taken up humanitarian search-and-rescue duty in the Mediterranean, replacing the LÉ Eithne which is due back to Cork harbour on Friday morning.

The flagship, which rescued 3,376 migrants during its six-week mission, will berth just a half hour before the new Naval Service patrol vessel LÉ James Joyce also steams into Haulbowline for the first time.

Relatives of the 68 crew and two Army medical corps staff have also been invited to the Naval base for the homecoming.

The LÉ Eithne left on May 16th last for the Naval Service’s first overseas humanitarian search-and-rescue tasking, which was approved by Mr Coveney in co-operation with the Italian maritime rescue co-ordination centre.

The decision to send the ship was taken after 850 people, including small children, drowned in the Mediterranean in April, making it the worst migrant disaster in European waters so far this year.

The 3,376 migrants of 21 nationalities picked up by the LÉ Eithne during 22 operations included a two-week-old baby, and some of those rescued were treated for dehydration and chemical burns caused by leaking fuel tanks on overcrowded vessels.

The ship’s crew was offered counselling during the mission, as part of the Defence Forces’ critical incident stress management initiative, and Mr Coveney was briefed on the challenges when he visited the LÉ Eithne in Malta on July 7th.

Commenting shortly before he met the departing crew of the LÉ Niamh last Friday, Mr Coveney acknowledged the intense nature of the work and said a third ship might be sent out on rotation.

The Government is committed to the search-and-rescue operation, which has also involved ships from Britain, Italy and Germany, until the end of September. Most of the migrants are being landed into Italian ports, with many heading further north to seek refuge in Germany and Sweden.

The International Chamber of Shipping has this week issued new guidelines on safe treatment of refugees rescued by merchant ships, and has been critical of “the continuing failure of governments to provide adequate state-backed rescue resources, as required by international law”.

The new 90m offshore patrol vessel LÉ James Joyce will berth close to the LÉ Eithne this morning, as a sister ship to the LÉ Samuel Beckett. A third new ship is currently being built as part of the fleet replacement programme at the Appledore shipyard in Devon, England.

The former patrol vessel LÉ Aoife is due to be handed over to the Maltese defence forces next month to assist in Maltese humanitarian search-and-rescue.