The crew of the LÉ Eithne have been involved in two separate operations, successfully rescuing over 500 migrants in the Mediterranean. Video: Defence Forces 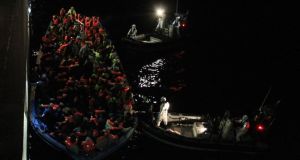 The crew of the LÉ Eithne rescuing endangered migrants in the Mediterranean. Photograph: Irish Defence Forces

Irish vessel LÉ Eithne has carried out its second rescue of hundreds of migrants in less than 24 hours.

The Naval Service flagship rescued 300 migrants in the Mediterranean, 45km north of Libya, on Friday morning.

This rescue comes only a day after the shipcarried out its first rescue in the Mediterranean.

At 8am on Thursday morning, the Irish flagship received an alert there were five vessels in potential distress about 60km off the coast of the North African state and rescued 201 migrants.

Minister for Defence Simon Coveney said the continued efforts of the LÉ Eithne to help the migrant crisis in the Mediterranean was “commendable”.

“This second rescue coming immediately after handing over rescued migrants from yesterday’s operation reflects the commitment and professionalism of the ship’s crew,” he said.

The Italian Marine Rescue Co-ordination Centre alerted the Irish vessel at 4am, Friday, the migrants were on board a barge that was trying to cross the south central Mediterranean.

Mr Coveney confirmed the 300 migrants were taken on board the ship, which was waiting on further instructions from the Italian co-ordination centre.

Of the 300 migrants rescued, 217 were men, 35 were women and 48 were children, according to a statement from the Irish Defence Forces.

Friday’s rescue was only the second time the LÉ Eithne has been involved in a rescue operation of migrants in the Mediterranean.