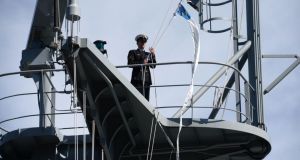 The Naval Service ship involved in recovering the black box from Air India Flight 182 in 1985 has been decommissioned today by Minister of State for Defence Paul Kehoe.

Mr Kehoe attended the ceremony for LÉ Aoife at the quayside in Waterford.

The Aoife - now no longer a Long Éireannach - had been the longest serving vessel in the Naval Service fleet, and was twinned with the southeast city.

Mr Kehoe paid tribute to the ship’s 35 years of outstanding service to the State, and noted that it had travelled in excess of 600,000 nautical miles - equivalent to circumnavigating the globe 28 times.

Crews serving on the ship boarded over 4,700 vessels at sea and detained over 440 fishing vessels.

Mr Kehoe also recalled the ship’s many successful fishery protection and search and rescue missions, and the recovery of the black box from the plane which was blown up while in Irish airspace on June 23rd, 1985.

Mr Kehoe paid tribute to the LÉ Aoife crews who had taken great pride in the ship’s close association with Waterford, and had raised many thousands of euro on behalf of University Hospital Waterford children’s ward.

The ship will be taken to the naval base in Haulbowline, Cork Harbour, where it will be prepared for sale.