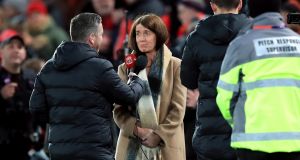 Liverpool manager Jürgen Klopp paid tribute to Seán Cox after meeting the Irish man on his first return to Anfield since he suffered a brain injury in an unprovoked attack by a Roma supporter in the city last year.

Cox attended the Premier League leaders’ 3-1 victory over champions Manchester City on Sunday with his family.

Klopp said before the game that the attack on the father-of-three from Dunboyne before the Champions League semi-final in 2018 was “the lowest point in my whole time at Liverpool” and that the Meath man’s return to the stadium would be one of his highlights.

Klopp met Mr Cox shortly after the full-time whistle and said in his postmatch press conference: “It was very nice. He was very happy to see me and I thought I’m much more happy to see him, I think we had a draw.

“His wife and son were there as well so it was a wonderful day for them. That’s exactly what we wanted.

“Whenever he wants to come . . . He can move to Liverpool and then he gets a season ticket 100 per cent. It was for all the boys really important news when we heard he was able to go to the stadium and watch a football game.”

In his programme notes for the match, the German wrote: “Seán’s name and that of his wife Martina and his wider family makes me think of courage, spirit and renewal. Sean is an inspirational figure in this club’s story now.”

After almost 18 months of treatment in Ireland, Mr Cox (54) recently moved to a specialist neurological facility in the north of England for a 12-week rehabilitation programme, focused on developing his speech and movement.

Earlier this year, a “legends” charity match in Dublin raised €748,000 for the Seán Cox Rehabilitation Trust and John Bishop and Dara Ó Briain are among the comedians performing at a benefit for him at Dublin’s 3Arena in January.