Judge criticises ‘extraordinarily rare’ presence of gardaí on the streets 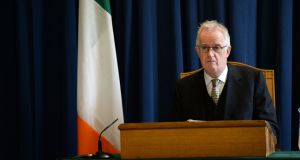 The failure of gardaí to police cycle lanes is indicative of their lack of visibility on the streets, Disclosures tribunal chair Mr Justice Peter Charleton has said.

The judge concluded that Ireland has a “real problem due to the invisibility of our police force”.

In a personal aside in the tribunal report, Mr Justice Charleton said he had only seen a garda once in the hundreds of journeys he had made between the Four Courts and Dublin Castle during the course of his investigations into a smear campaign against Sergeant Maurice McCabe.

He said it was “extraordinary” how much time gardaí spend isolated in Garda stations and in patrol cars.

“It is extraordinarily rare that gardaí are seen in uniform on the streets,” the judge observed in his tribunal report, “in contrast to other major cities, such as Rome and London and Athens, where police are visible at intersections, at junctions and in public plazas.”

The judge also observed that gardaí routinely fail to keep cycle lanes free for vulnerable road users even if the transgressions occur near Garda stations.

“Cars block cycle lanes, intrude on them and endanger cyclists. That happens repeatedly within a minute’s walk of Garda stations. So, where are the gardaí?”

Mr Justice Charleton said some people may see the failure of gardaí to police cycle lanes as a “small example” but “the consequences of serious injury, for even one person, is a tragedy”.

He concluded: “If it is said that the gardaí are too busy to be out on foot or on bicycles, the tribunal begs to doubt that. Everyone serving in the police should give a portion of the day to foot and bicycle patrols.”

Being visible was one of seven obligations that gardaí should have, he suggested. He recommended that gardaí shouldn’t moan, but a garda should “ask himself or herself what he or she has done on any particular day for the taxpayer”.

“Diligence and application to duty are expected of all: not moaning,” he stated.

Gardaí should take pride in their work and in their uniform.

They should always be honest.

They should be visible.

They should be polite to the public. “There are certain words which should never pass the lips of those who serve their country in uniform.”

They should serve the people of Ireland and not moan.

They should put the their obligation to the truth in front of sticking up for each other.

Gardaí should always be self-analysing their performance and shouldn’t need tribunals to tell them how to behave.

1 Large crowds gather on Dublin’s Grafton Street on eve of lockdown
2 Thousands of gardaí mount checkpoints and patrol parks, beauty spots
3 One hundred Irish retailers for all your online Christmas shopping
4 Life under Level 5: Where can I go, who can I see, what is closed and what is open?
5 John Gilligan arrested along with two others in southern Spain
Real news has value SUBSCRIBE