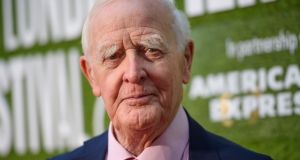 John le Carré told RTÉ radio in 2019 ‘I am indeed applying for an Irish passport. And it means a lot to me.’ File photograph: PA

Acclaimed English novelist John le Carré who died on Sunday at the age of 89 was applying for an Irish passport and considering moving to Ireland after discovering a family connection with west Cork, according to friend and fellow writer John Banville.

Banville said le Carré , whose real name was David Cornwell, was appalled at developments in the United Kingdom in recent years. Namely the rise of English nationalism, leading to the UK voting for Brexit and he was exploring taking out Irish citizenship and moving to the Republic.

6 Covid-19: We have never seen a pandemic of this scale that was shorter than 2-3 years

12 All Creatures Great and Small: Who was the real James Herriot?

20 Large majority of over-85s will get first vaccine by end of this week, Donnelly says

21 A musician’s suicide: ‘Gar would be alive today if there wasn’t a pandemic’

26 Bill Gates: ‘I’m not trying to take anything away from Greta Thunberg, but...’

27 Legal challenge brought over decision a woman was overpaid pension

28 Owen Doyle: Calamity in Cardiff is hard to get your head around

36 How Enter The Dragon became a martial arts phenomenon

38 ‘It was tribal and sexual’: Alice Cooper on the debauchery of Detroit rock

39 Vaccinated in London: I feel guilty that people I love in Ireland haven’t been inoculated