Joe Duffy travels back in time for Cruinniú na Cásca

‘You could feel the pulse of Ireland,’ says Enda Kenny as events draw large crowds

Over 500,000 turned out across the State on Monday in a series of arts events, organised by RTÉ. Video: Ronan McGreevy 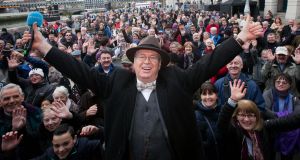 Joe Duffy during a 1917-themed Liveline at the Custom House in Dublin. Photograph: Gareth Chaney Collins

It was a long day for the children of the Hell for Leather troupe of céilí dancers from Kilrush, Co Clare.

They left west Clare at 5am, bound for Dublin, and were still dancing 12 hours later as the céilí mór outside the Custom House came to an end.

As the sun set over the Liffey, two rowing boats passed by, one bearing the Starry Plough flag, the other the flag of the Irish Volunteers.

Throughout the day the 40 children, ranging in age from seven to 19 and conspicuous in their county colours, were joined by thousands of spectators for one of the setpiece events of Cruinniú na Cásca. The series of arts events, organised by RTÉ, drew an estimated crowd of more than 500,000 people across the State on Monday.

Among the early arrivals was the casually dressed Taoiseach, Enda Kenny, who, wearing jeans and runners, did a twirl for the cameras with a few of the children before declaring on Twitter: “You could feel the pulse of Ireland. ”

1/2 Was at #Cruinniu earlier - thousands at all venues from all over the world - all free - you could feel the pulse of Ireland....

2/2 ....we are a global people and not afraid to express ourselves any more.
This will catch on massively. #Criunniu #CreativeIreland

Hell for Leather leader John Fennell, who doubled as master of ceremonies, said his troupe had never performed outside Clare before. They were backed by the Dartry Céilí Band.

“The crowds didn’t just come and watch,” said Mr Fennell. “They joined in and they were very gracious towards our dancers. It was a huge experience for a lot of our children. You cannot buy experience like that. One of our fellows was showing Enda the brush dance. If he fails in politics, he can always take up on dancing.”

Edward and Maria Ryan came from their home in the Dublin mountains especially to watch the céilí dancing. Ms Ryan declared it an “absolutely brilliant day. To see those young people dancing today would absolutely put the life into you.”

The dancing was interrupted for an hour and a half by a special RTÉ Liveline programme, presented by Joe Duffy from the stage at Custom House Quay.

The programme was broadcast as if from 1917. The country was then preoccupied with much greater concerns than in the present day, following the tumult of the Easter Rising and the fact that thousands of Irishmen were still dying on the Western Front during the first World War.

The programme featured an item with Denis Ryan, who found a dreaded “death penny” given to the families of those killed in the war. It belonged to Felix E Patrone of the Royal Dublin Fusiliers, who tragically died after the war ended and was buried in France. Mr Ryan found the bronze medal in Walkinstown in the 1970s and spent years trying to trace Patrone’s family without success.

Following an appeal on Liveline, the medal was reunited on Easter Monday with Patrone’s granddaughter Geraldine Davis, who lives in England.

Thousands of children turned up in St Stephen’s Green to bang the big communal drum or queue to get into the tents, particularly those devoted to storytelling and Lego. Some 4,200 people came through the gates of Swords Castle for a fun family day.

The Minister for Arts and Heritage, Heather Humphreys, said it was “truly a day when we came together to celebrate our creativity and the energy and diversity of Ireland today”.

1 Man unidentified in psychiatric hospital for 30 years may have DNA taken
2 Miriam Lord: Another dog’s dinner as D’Arcy jumps on the gravy train
3 ‘Insane’ gathering of hundreds of students in Galway condemned
4 US election: Everything you need to know about Tuesday’s presidential debate
5 Covid-19: One death and 363 further cases confirmed in State
Real news has value SUBSCRIBE