Ivan Yates: ‘I was a poster boy for bankruptcy tourism’

Broadcaster relieved at return of family home, and plans to step back from media 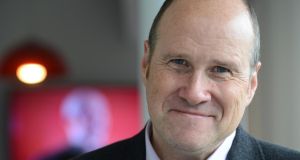 Ivan Yates: ‘This allows us to get on with the final phase of our life, and I intend to step back from media work.’ Photograph: Cyril Byrne

Broadcaster and former Fine Gael minister Ivan Yates is planning to retire this summer and live a quieter life on the family farm following the settlement of a legal dispute with AIB over ownership of his Wexford property.

He says he is unable to put into words the intensity of the battle he has had to wage over the past decade to prevent the loss of the property to the bank, and to do so while all the time being so in the public eye.

“I was a councillor in 1979, so between politics, business and the media, I have given it a fair stint.”

He was just 21 when first elected to the Dáil. He served as minister for agriculture, food and forestry in the 1994-1997 rainbow coalition led by John Bruton. After leaving politics, Yates went into business, saw that business collapse and, after going through bankruptcy in Wales, developed a new career in broadcasting.

We were literally homeless, in that we didn’t own our own home. The situation was that my bankruptcy did imperil the home

His wife, Deirdre, is finishing her career as a primary school teacher in July, and now that the couple have settled a massive High Court dispute over their home in Blackstoops, Enniscorthy, Yates is in a position to wind down his broadcasting career.

He presents Newstalk’s drivetime programme, The Hard Shoulder, and presents with Matt Cooper The Tonight Show on Virgin Media One. Yates lives in Dublin during the week because of his broadcasting commitments.

“There is no way that if Deirdre lives in Enniscorthy that I’d be living in Dublin, so this is a real moment, one of the happiest things that has happened in my life.”

Yates left politics in 2001 and became involved in the rapid expansion of Celtic Bookmakers, a chain of betting shops. However, the business went into receivership in 2011, and AIB pursued him for debts of €3.6 million.

He went to live in Wales and availed of the bankruptcy laws there, which were much less harsh than the regime that existed in Ireland at the time. He described the trauma of seeing his world collapse around him in his autobiography, Full On (2014).

“When I went to Wales in 2012, it was a 12-year life sentence to go bankrupt in Ireland under its draconian, Victorian laws.

“And when I came back in 2013, I wasted no opportunity to excoriate governments, politicians and the system to adopt the UK Insolvency Act 1986 that gave people a fresh start, allowed everyone to get on with the rest of their lives, and allowed closure for the financial institutions.”

At the time of his move to Wales, Yates came in for a lot of criticism. “I started out as a poster boy for bankruptcy tourism and [got] massive odium about that, and really to this day, people have never really got over that in terms of my political life and public life.”

However, he is pleased the law here has been changed so it now reflects the UK regime, something that has “completely transformed” the situation of tens of thousands of people, he says.

At the time of his move to Wales, it was not clear whether it would lead to the loss of the Blackstoops property, and even now he cannot say definitively whether, with hindsight, the move was a good one. “That’s a complex question.”

Yates and his wife had signed personal guarantees for Celtic Bookmakers’ borrowings. In 2016 the bank was awarded a €1.6 million judgment order against Deirdre.

The bankruptcy trustees appointed by the Welsh courts got possession over the Yates family home and 150-acre farm in Blackstoops, but could not evict Yates because his mother, who is now 88, had the right to continue living on the property.

“I mean we were literally homeless, in that we didn’t own our own home,” Yates says. “Because of my mother’s life interest, we have always remained there, and it has been our family home, but the situation was that my bankruptcy did imperil the home.”

The house was bought by his great-grandfather, John F Yates, in 1890. “I am the fifth generation – my family are – of Yateses at Blackstoops, Enniscorthy, and this [battle over the property] has been the most important thing in my life for the last decade, since Celtic Bookmakers went into receivership in January 2011.”

There is a confidentiality clause. There will be no further litigation. The matter has been resolved

In 2017 Ivan and Deirdre took a complex High Court action against AIB and the bankruptcy trustees, challenging their taking possession of the Enniscorthy property on a number of grounds.

The case was to go ahead on February 4th, and was expected to last two weeks. But court records show it was settled on January 31st. Yates says he cannot discuss the settlement.

“There is a confidentiality clause. There will be no further litigation. The matter has been resolved,” is all he will say when questioned on the detail. But the key point for him is that he will continue to live at Blackstoops.

Ivan and Deirdre have four children, aged 25-31, and a grandchild who lives in Co Wexford.

Settling the case “is a massive relief to my mother, my extended family and my own four children. I really want to thank my legal team, Ensor O’Connor Solicitors, a small family practice in Wexford, and my senior counsel, Jerry Healy, and Peter Bland SC and Paula McCarthy BL.”

“This allows us to get on with the final phase of our life, and I intend to step back from media work.” His broadcasting contracts run up to August, and he plans to step back then, though he has not yet decided on the full details.

The aggressive approach adopted by Yates on the party leaders’ debate on Virgin Media One during the general election campaign provoked a lot of comment and no small amount of criticism.

He began the debate by accusing the seven party leaders in front of him as being a “bunch of charlatans and chancers”. But he does not regret his approach.

“I honestly believe that the 1977 general election promises caused a decade of recession, and the 2007 election directly contributed to the crash.”

He dislikes what he describes as the “Dutch auction” aspect of the election campaign just finished, and feels the media did not properly hold the parties to account over the promises they were making. “And the public lapped up the promises. They always do.”

“I have been involved in 14 general elections, and my big fear was history repeating itself. I actually don’t mind a few brickbats and I don’t mind social media flak, that never bothers me.”

The politicians “were putting their own popularity and short-term party interests above the national interest, and I sort of knew that the Department of Finance were absolutely doing their nut about this, and couldn’t say anything.”

His plan for retirement is to “take life a bit easier”. Asked if he might not, given his personality, find that a bit of a challenge, he simply laughs.