26-year-old Sister Aaliya, originally from Limerick and a convert to Islam, has said that she met British citizen Khuram Shazad Butt, one of those responsible for the London Bridge terror attack and other extremists in Ireland. Video: Alan Betson 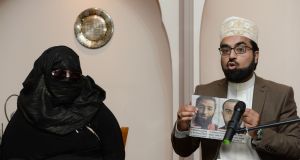 A second of the three men who killed eight people in the terror attack in London last weekend spent some time in Ireland, according to an Irish-born woman who was radicalised and who claims to have met him here.

The 26-year-old woman, originally from the Limerick area and a convert to Islam, said she met British citizen Khuram Shazad Butt and other extremists about 20 times in Ireland and the UK about 2½ years ago. Several of these meetings included Butt. This included a meeting at a house in the Santry area of Dublin, about 2½ years ago, she claimed.

She spoke at a press conference held by the Irish Muslim Peace and Integration Council in the Al-Mustafa Islamic Centre in Blanchardstown in west Dublin on Friday.

Chairman of the council and head imam at the centre, Shaykh Dr Umar Al-Qadri, said Sister Aaliya, a convert to Islam at age 18, had been successfully de-radicalised by a Muslim scholar at at mosque in London.

The three people named as responsible for the London attack on June 3rd were Khuram Shazad Butt, Rachid Redouane and Youssef Zaghba. It has already been confirmed that Redouane, a 30-year-old Moroccan-Libyan pastry chef, had until recently been living in Dublin.

The 27-year-old British citizen Butt, who was born in Pakistan, was known to the police and MI5 and was the subject of an investigation in 2015.

The woman, who identified herself only as Sister Aaliya and who wore sunglasses and black niqab covering the lower part of her face during the press conference, said she did not know Redouane.

She said she feared for her safety and had been threatened several times by the extremists. She had been in a relationship with a man who associated with extremists for about 10 months. She said the man was “very controlling” and she had fled London late last year . “I’ve been threatened on numerous occasions . . . I came back to Ireland to get away from all that.”

Asked what the extremists she met in Dublin had discussed, the woman said she had been excluded from meetings they had and that they discussed things in their own language, but that their dream was “to have an army for jihad”.

She also claimed there were at least 150 radicalised Muslims living in Ireland. She alleged some extremists were coming in to Ireland on buses and via Belfast to avoid immigration.

Dr Al-Qadri told several hundred men and boys attending Friday prayers at the mosque that those extremists who said they were engaged in jihad were perverting Islam. He told them not to be afraid to challenge those individuals in their communities.

“Because if we don’t challenge these individuals what will happen is they will slowly spread their cancerous ideology to others and one way to tackle this, to refute this radicalisation is education,” he said.

Asked about the claims made at the press conference, An Garda Síochána said the force continued to liaise closely with security and law enforcement agencies in the UK and internationally “to share and assess any relevant intelligence and provide assistance where appropriate”.