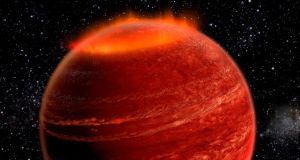 The Irish astronomer involved in identifying the most powerful aurora recorded around a failed star outside the solar system has criticised the Government’s lack of support for basic scientific research.

Sligo-born NUI Galway (NUIG) graduate Dr Gregg Hallinan, who led the team which made the discovery published in Nature last week, said funding for basic research must be restored if Ireland is to maintain a healthy scientific infrastructure.

Recent policies have already “negatively impacted” on the performance of Irish universities in international rankings”, he said.

The team confirmed an aurora one million times brighter than the aurora borealis was detected in the sky above a “brown dwarf”, or failed star, outside the solar system.

The finding suggests brown dwarfs may be more like planets than stars and that detecting such auroras may allow astronomers to measure magnetic fields on exoplanets. These may be “a critical ingredient for habitability”, Dr Hallinan says.

It was while studying for his PhD at NUIG in 2006 that Dr Hallinan, from Castleconnor in Co Sligo, discovered that brown dwarfs were more active than previously thought.

In the early 2000s, astronomers found that brown dwarfs emit radio waves, and it was assumed this was due to the action of an extremely hot atmosphere heated by magnetic activity near the object’s surface.

Dr Hallinan detected pulsing at radio frequencies, similar to other planets in the solar system, and this led him to wonder if the radio emissions were caused by auroras similar to the magnetised planets in our solar system.

He pursued his hunch by conducting an extensive observation campaign of a brown dwarf called LSRJ 1835+3259, using the most powerful radio telescope in the world – the Very Large Array (VLA) in New Mexico. Giant optical instruments, including the Palomar’s Hale Telescope in California and the WM Keck Observatory’s telescopes in Hawaii, were also trained on the dwarf.

“Irish astronomers have no access to telescopes of the kind we used for this discovery,”Dr Hallinan said, although a new initiative hopes to build a radio telescope in Birr, Co Offaly.

Irish astronomers must also be given access to the European Southern Observatory (ESO). Only Ireland, Norway and Luxembourg are not members of ESO in western Europe.

“This has to be redressed to allow Irish astronomers make the discoveries that they are capable of,” Dr Hallinan said. “They have the talent but lack the tools.”