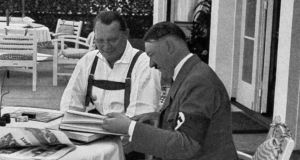 Count Gerald O’Kelly – or, to give him his full name, Count Gerald Edward O’Kelly de Gallagh et Tycooly – was the principal owner of Vendôme Wines, in Paris. He had been one of the Free State’s principal diplomats at the League of Nations and then effective ambassador to Belgium and France (where he was known as a minister plenipotentiary) before falling foul of Éamon de Valera’s government in 1935.

O’Kelly set up Vendôme Wines, on Place Vendôme, in 1938 and remained there after the Germans overran the French capital in May 1940.

According to a new book, No Way Out: The Irish in Wartime France 1939-1945, by the Paris-based journalist Isadore Ryan, three-quarters of O’Kelly’s company’s business during the war was with the occupying Nazi forces. One document he has discovered lists Göring, then head of the Luftwaffe, as the first of the many “clients Allemandes de la Vendôme” (German clients of Vendôme).

Göring spent a lot of time in France in 1940, in preparation for the Blitz and the Battle of Britain.

After the war O’Kelly said he never sold the Germans the “good stuff” and he used his contacts with them to gather information on behalf of the British.

He left France in the late 1940s, refusing to pay the French a “national solidarity tax” as Vendôme Wines had been “completely knocked out” by the war and he had lost 90 per cent of the capital he put into the company. “I cannot remember the exact figure,” he declared in 1951, “but it was a disaster.”

But Mr Ryan credits Count O’Kelly with doing his best to help the Irish stranded in France after the German occupation. He interceded with the Nazis to have Irish citizens released from detention camps and tried to meet an increased demand for Irish passports.

Many British passport holders with Irish links tried to get Irish passports during the war, in a similar way to what is happening today as a result of Brexit. The demand was so great that the Irish Embassy in Paris ran out of passport books after the German occupation.

O’Kelly, as a “special counsellor”, was allowed to travel between Paris and Vichy, the French town where the Nazis’ puppet administration was based, and acted as guarantor for many British citizens seeking Irish passports.

Mr Ryan concluded that O’Kelly was “unjustly forgotten” and had “managed to combine outstanding service on behalf of the Irish community in France with the somewhat less avowable business dealings during the war”.

No Way Out: The Irish in Wartime France 1939-1945 is published by Mercier Press