Research says 20,000 tonnes of packaging waste will be generated over next few days 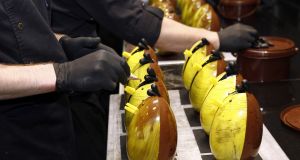 Irish people will spend almost €40 million on more than 17 million Easter eggs over the next few days, generating about 20,000 tonnes of packaging waste, a new survey suggests.

The research from the waste recycling group Repak also says that almost one-third of people will not fully recycle the packaging waste generated by all the chocolatey goodness they plan to eat.

It found that 60 per cent of those who buy chocolate eggs in the days ahead will spend up to €30 while the average household will eat its way through eight chocolate eggs.

Repak said Irish consumers would open enough packaging to fill 161 Boeing 747s and a marathon runner would need to race more than four million marathons to burn off the amount of calories Irish chocolate lovers will collectively consume over Easter.

The company released the data to highlight the level of packaging waste which Easter eggs still generate.

According to the survey nearly one-third of people admitted to not recycling all of their egg packaging.

Mr Clancy welcomed the efforts being made by confectionery companies to reduce their environmental impact by driving packaging reduction initiatives.

He pointed out that the packaging on Easter eggs had been reduced by more than 25 per cent in recent years.

The survey of 800 people also highlighted the sinful side of Irish consumers with three-quarters admitting to a degree of gluttony by eating at least part of someone else’s Easter egg.

Speaking of a lack of control, according to the survey, half of all adults here will drink alcohol and eat meat on Good Friday.