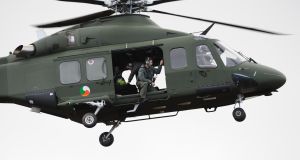 An Air Corp AW139 helicopter. The fleet will not be grounded as it not is believed the incident was due to a ‘significant mechanical defect’. File photograph: Aidan Crawley

The Irish Air Corps has said it will not ground its fleet of six Agusta Westland AW139 helicopters after the door of one fell off mid-flight on Thursday, but is in consultation with the manufacturer.

An investigation is under way after the rear door of the aircraft came off and plummeted more than 250 metres to the ground at Moyle Park secondary school in the south Dublin suburb of Clondalkin.

A number of people in the area saw the door fall but nobody was hurt.

On Friday, the Air Corps confirmed it would not be grounding its fleet as it did not believe the incident was the “result of significant mechanical defect in the helicopter”.

This position was arrived at following ongoing consultation with the manufacturer Leonardo.

“The Irish Air Corps will, however, work closely with Leonardo to determine the cause,” it said in a statement.

At the time of the incident, just before 6pm, the helicopter crew had successfully completed a life-saving mission to a Dublin hospital and were returning to Baldonnel Aerodrome for fuel.

One of the six aircraft within the fleet is dedicated to the Emergency Aeromedical Service (EAS) 365 days a year and is rotated on a regular basis in order to complete routine maintenance, the Air Corps said.

“The Irish Air Corps have been operating these aircraft since 2006 and as a result the engineers have acquired significant expertise in the maintenance of the fleet,” it said.

“That being said, the Irish Air Corps continue their close relationship with the aircraft manufacturer Leonardo.”

Such incidents are investigated by appropriately trained military personnel and not the Air Accident Investigation Unit (AAIU), an arm of the Department of Transport which probes serious civilian crashes.

The Air Corps does, however, contact the AAIU to inform it if any such incident occurs.

Although no indication of any timeline for an investigation was given, Fianna Fáil issued a statement saying it should be concluded and published without delay.

“Thankfully no one was hurt in this very serious incident,” party defence spokesman Jack Chambers said in a statement.

“Had the door hit someone on the ground it could have fatally injured them. A member of crew in the aircraft or indeed any patient being transported to hospital could have been injured too.”

The Defence Forces had previously said its personnel were on the grounds within five minutes and an investigation team within 30. The door was recovered and brought to Baldonnel.

The emergency aeromedical service will recommence on Friday, as normal, with a replacement aircraft and crew.

Somewhat surprisingly, it is not the first time an Air Corp helicopter’s door fell off and crashed to the ground.

In 2009, a similar incident occurred with an AW 139 which had been transporting the then tourism minister Martin Cullen over Killarney Golf Club. It was recovered in the nearby Killarney National Park.

However, most of the damage caused from that incident was to the minister, who was repeatedly asked to justify a number of such flights at a combined cost of almost €6,000.