Is it really possible that one person in five in Ireland has never used the web? 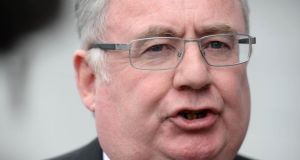 Pat Rabbitte: as minister for communications, he recognised the problem. Earlier this year he announced the roll-out of an extensive rural broadband campaign. Photograph: Dara Mac Donaill/The Irish Times

With the march to a paperless world sometimes seeming unstoppable as a result of relentless campaigns from banks and utility companies to get us online, it would be easy to assume the whole nation is happily surfing the web and scanning social networks in search of news, information and YouTube clips of kittens.

To assume that would be wrong. In the week Web Summit 2014 took over Dublin 4 – and saw organiser Paddy Cosgrave throw his rattle out of the pram because the wifi in the RDS went down briefly – the Central Statistics Office published its yearbook, which showed we are not as connected as we might think.

Eighteen per cent of people aged between 16 and 75 say they have never accessed the internet. Nearly half of those aged between 60 and 75 have never been online, with rural areas and deprived areas likely to be overrepresented in these statistics.

On one level, it would be easy to think: so what? Surely we can all live without much of the content that appears online? How many Facebook updates do you need to see? But something is very wrong if one in five people has ever accessed the internet. They are missing out on so many things that would improve their world immeasurably – lower-cost utilities and banking and access to a vast knowledge bank are among the things about half a million Irish people deny themselves.

At a broadband conference in Dublin earlier this year sponsored by the United Nations, businessman Denis O’Brien described access to the internet as a human right and he was correct to do so.

He claimed broadband could lift developing countries out of poverty through improved access to healthcare, education and basic social services.

We need something similar here. As minister for communications, Pat Rabbitte recognised the problem. Earlier this year he announced the roll-out of an extensive rural broadband campaign. If it delivers, it will improve the lot of many living outside urban centres.

His department also took steps aimed at addressing Ireland’s digital divide. As part of a national digital strategy launched last year, training grants of €1.4 million were given to more than 200 organisations operating across 700 locations. As he was announcing the grants, Rabbitte appealed to the 80 per cent of us who are online to help those who were not.

“Helping someone to cross the road was always an example of a good deed,” he said, suggesting a 21st-century equivalent would be helping people get to grips with the web. “This concerns everyone, it’s not just about the one in five yet to embrace the internet: it also about those who have the skills and what they can do,” he said. He was absolutely right.