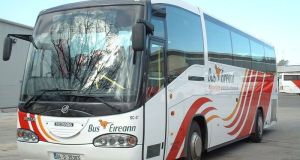 Bus Éireann has begun an investigation after a woman travelled 25kms in the baggage compartment of one of its coaches after she was accidentally locked inside.

The middle-aged woman from Co Clare, who does not want to be identified, was travelling to her home in Ballyvaughan from a Galway hospital where she has been undergoing treatment for an illness.

On arrival in Ballyvaughan, the woman is understood to have tried to get her bag by reaching into the baggage compartment but was unable to reach it after it lodged behind larger luggage. The woman then climbed in to try and retrieve it.

After climbing into the compartment, it’s thought she may have fainted. The doors were closed by the driver and the bus continued its journey to Doolin, 25kms away, where the woman was discovered.

The woman had a discussion with the driver in Doolin and arrangements were made to get her home by car via Lisdoonvarna.

“It’s unbelievable,” said a family friend. “ I can’t believe something like this could happen. She doesn’t want to make a big deal about it and I don’t if it’s because she’s embarrassed or just isn’t bothered by it but I know she was very frightened by the whole thing.”

“When she got out of the bus in Doolin she didn’t know where she was. She had words with the driver and someone arranged to drive her to Lisdoonvarna and she was taken home then from there,” the friend said.

“I can’t even imagine what would have happened if the bus had gone the Corkscrew Hill route to Doolin. She would have been thrown all over the place and would definitely have been hurt,” she added.

A company spokeswoman said: “Bus Éireann takes complaints very seriously and we investigate all complaints. This matter is currently being investigated and you will appreciate no further comment can be given pending the outcome of the investigation.”