Mother and daughter drowned after their was car hit by unaccompanied driver, jury told 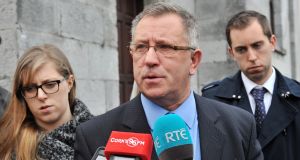 Noel Clancy, flanked by his daughter Fiona and son Delan pictured at Mallow Coroner’s Court, Co Cork, following the inquest into the death of his wife and daughter Geraldine and Louise Clancy. Photograph: Daragh McSweeney/Cork Courts

Gardaí should be given the power to confiscate cars from unaccompanied learner drivers, a jury in the inquest of a north Cork road collision has said.

The jury made the recommendation after hearing how Geraldine Clancy (58) and her daughter Louise (22) died after their vehicle was struck by a car driven by their neighbour and learner driver, Susan Gleeson, on December 22nd 2015.

Ms Gleeson had been driving for eight months and had just nine driving lessons when she collided with Ms Clancy’s Ford Focus while driving on her own in her father’s Opel Vectra. The incident took place at Ballyderowen on the main Fermoy to Ballyduff road.

Ms Gleeson pleaded guilty last November to dangerous driving causing the deaths. She was given a three-year suspended sentence and banned from driving for 15 years. The jury on Wednesday returned verdicts in accordance with those facts.

They also recommended that Minster for Transport Shane Ross should amend the law to empower gardaí to seize any vehicle being driven by an unaccompanied learner driver, which is in breach of the law that states they should be accompanied by a fully-qualified driver.

The inquest before north Cork coroner Dr Michael Kennedy heard Ms Gleeson deny that she was speeding but admit that she was driving too fast as she approached a junction which is governed by a yield sign.

She told the inquest that she was in second or third gear as she pulled out from the junction to turn left towards Ballyduff but she misjudged the junction. She went over to the wrong side of the road and collided with Ms Clancy’s car .

“It all happened in a split second. My initial thought was that it was not a strong impact and I did not fear for my life or the people in the [other] car,” said Ms Gleeson. She described how the other car went through a gap in a stone wall and flipped upside down on a field.

Ms Clancy’s car ended up wedged upside down between the road and the bank of a flooded drain . Rescuers were unable to open the car doors as they had no space and the women drowned.

Questioned by Paddy McCarthy SC, counsel for the Clancy family, Ms Gleeson agreed that it was possible the accident might have been avoided if she had been accompanied by a qualified driver and her advice to learner drivers was to never to drive alone.

“ I wish I could turn back the clock and this never happened,” she said.

Husband and father of the deceased women, Noel Clancy, described to the inquest how he stood on top of his upturned car and helped to attach chains to it without realising who was in the vehicle.

He welcomed the jury’s recommendation.

“It is too late for us but hopefully it will save lives down the road,” he said.