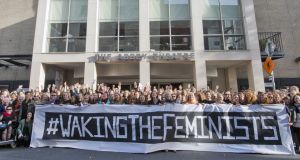 Women demonstrating at the Abbey Theatre during the Waking The Feminists event in November to highlight the lack of gender equality in the Abbey’s programme of events for 2016. Photograph: Brenda Fitzsimons

An Aran island arts centre has set out to counter the Abbey Theatre’s 1916 commemorative programme by ensuring that 90 per cent of its plays this year are written and performed by female artists.

Only one of 10 plays staged at Áras Éanna, Inis Oírr’s arts centre, this season will be performed by a man – “and that’s because it about the life of Pádraig Pearse”, the centre’s director Mairéad Ní Ghallchóir said.

Olwen Fouéré , Alison Spittle, Breda Larkin and Grace Dyas are among artists the centre hopes to host in 2016.

Her Facebook posting prompted reaction from other female artists, and led to presentation of a petition with 5,500 signatures to the Abbey last November. The theatre board set up a subcommittee on gender equality and its director, Senator Fiach MacConghail, expressed regret.

“In a year when much stage space will be taken up with male-centred dramas about the Rising, and in light of recent developments at our national theatre, we felt that we could do our little bit to level the playing field,” Ms Ní Ghallchóir said.