‘Higgins has really screwed it for most of us,’ says Independent Senator 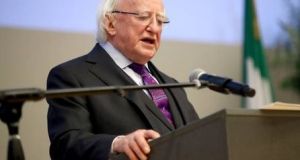 President Michael D Higgins: he already has the support of the Labour Party and Fianna Fáil. Fine Gael is also expected to support him

Independent Oireachtas members seeking to stand against Michael D Higgins for the presidency may decide to allow just one of their number secure a nomination from TDs and Senators.

Gerard Craughwell, a Senator who wants to stand against Mr Higgins, said there were only 22 potential supporters from the Dáil and Seanad for an Independent presidential candidate.

An aspiring candidate must secure 20 signatures from TDs or Senators, or the backing of four county councils, to get on the ballot paper for a presidential election.

As well as Mr Craughwell, other Senators interested in the presidency include Pádraig Ó Céidigh and Joan Freeman. Roscommon Independent TD Michael Fitzmaurice has said he would like to see someone contest against Mr Higgins, who is expected to confirm this week that he wants a second term in Áras an Uachtaráin.

Always feel we are lucky to have him as our President

Mr Fitzmaurice has backed away from running himself, but is assisting other Independents.

Mr Higgins already has the support of the Labour Party and Fianna Fáil. Fine Gael is also expected to support Mr Higgins.

Taoiseach Leo Varadkar on Sunday retweeted a Twitter post from Minister for Health Simon Harris, in which Mr Harris said: “Always feel we are lucky to have him as our President.”

Sinn Féin is considering whether to stand a candidate, although party leader Mary Lou McDonald has strongly indicated it will do so.

Mr Craughwell said some discussions had taken place among Independents to allow one of them secure the required 20 signatures from the Oireachtas. It would mean, for example, that if he attracted five TDs and Senators to his banner and Mr Ó Céidigh had 10, Mr Craughwell would release his five supporters to support Mr Ó Céidigh.

However, Mr Craughwell would then seek the support of county councils and would not withdraw from the contest altogether.

“That is the scenario that Mick Fitzmaurice put to us, and I am quite happy to go along with that,” Mr Craughwell said. “Otherwise we will kill off the chances of a nomination.”

He said there were 22 members of the Dáil and Seanad who could sign nomination papers, once those supporting Mr Higgins, or likely to support him, were discounted.

Higgins has really screwed it for most of us. If there is a not a race until mid-August, that means you have to put a campaign together in six to eight weeks. It’s tight

Mr Ó Céidigh said it was an “exaggeration” to claim an agreement existed, adding it was only mentioned in conversation. However, he indicated he may be open to such a proposition.

“There is no agreement. I have no problems sitting down and having some form of an agreement. It could happen, but if you are having an agreement you need to have structure to it and not just conversations about it.”

Mr Craughwell criticised the fact that there had not been “a word” from Mr Higgins.

“Higgins has really screwed it for most of us. If there is a not a race until mid-August, that means you have to put a campaign together in six to eight weeks. It’s tight.”

1 Tyrone midwife on the cover of Vogue magazine
2 Pubs reopening will not mean ‘fellas having a few pints and peanuts’, Holohan warns
3 Donald Trump’s political success is based on racism
4 Donald Trump is in trouble, and that could spell very bad news
5 Ireland earns ‘right to be hopeful’ again as Government fast-tracks plans to reopen country
Real news has value SUBSCRIBE