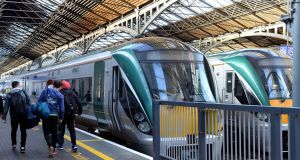 Iarnród Éireann staff are seeking increases along the lines of the 3.75 per cent annually secured by other workers in the transport sector. Photograph: Eric Luke

Talks will get under way on Monday on a pay claim by staff at Iarnród Éireann that unions have warned could lead to industrial action on the country’s railways if not resolved.

The trade union Siptu last week indicated that staff at the company were seeking pay increases along the lines of the 3.75 per cent annually secured by other workers in the transport sector such as Luas and Dublin Bus.

It also rejected any move by management at the State-owned rail operator to link pay rises to additional productivity.

The National Bus and Rail Union (NBRU) said staff were “frankly sick to the back teeth of listening to the jaded ‘We have no money’ line from management”.

Iarnród Éireann told the Labour Court recently that any increases not funded by further productivity measures would have a “catastrophic impact” on its financial position. It said it had accumulated losses of €159 million since 2007.

The new talks on the pay claim by 4,000 staff at the State-owned rail operator could run for up to five weeks.

Any unresolved issues arising from the new round of discussions can be referred to the Labour Court.

NBRU general secretary Dermot O’Leary said Iarnród Éireann workers had had to put up with no pay rises for more than nine years.

“Whilst one could reluctantly accept that this country was in the economic mire for a number of years, the fact is now that Iarnród Éireann has passed Celtic Tiger levels in terms of revenue.”

Siptu organiser Paul Cullen said his union’s members in Iarnród Éireann had a very reasonable expectation of a pay rise.

“The management agenda that our members should pay for any pay rises through increased productivity while continuing to subsidise the cost of public transport will be steadfastly rejected. Rather our members wish to see all parties to the discussions act reasonably in order to avoid what is increasingly looking like another dispute in the transport sector.”

The Irish Times reported last week that in a separate development, the Labour Court had recommended a 1.15 per cent pay increase for about 500 drivers at Iarnród Éireann in a bid to resolve a long-standing dispute over past productivity and the mentoring of trainee drivers.

This pay increase, if agreed, would be in addition to any company-wide increase in the talks, which are to get under way on Monday at the Workplace Relations Commission.