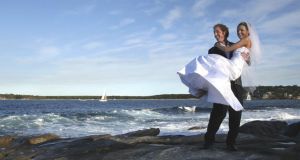 Under legislation, weddings must take place at a location easily identifiable with an address and open to the public at reasonable times

A leading organiser of secular weddings is preparing a legal action against the State over what it describes as a “narrow and arbitrary” interpretation of legislation which has stopped it conducting outdoor ceremonies.

The Humanist Association of Ireland was granted the legal authority to solemnise weddings in late 2012 and will preside over more than 600 ceremonies this year. However, it has been blocked from carrying out the wishes of couples seeking to marry al fresco by the General Registrar’s “interpretation of the legislation which is so narrow as to not make any sense”.

Under legislation, weddings must take place at a location easily identifiable with an address and open to the public at reasonable times. According to the association’s director of ceremonies, Brian Whiteside, the State’s current position is that this can only be a permanent structure.

The humanists have had multiple exchanges with the General Registrar in recent weeks trying to reach a comprise.

The General Registrar’s office said it insisted on weddings being held indoors “to avoid situations where marriages are solemnised to which there may be an impediment, to prevent forced marriages, and to provide an opportunity for the making of objections.”

It did not explain how four walls and a roof could safeguard against such eventualities.