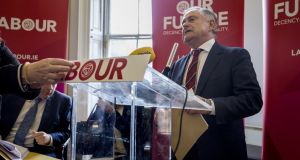 Labour Party leader Brendan Howlin says he has written to SDLP leader Colum Eastwood asking him to outline his intentions regarding a potential merger with Fianna Fáil. Photograph: Brenda Fitzsimons

The Labour Party and the British Labour party will have to organise together to contest elections in Northern Ireland if the SDLP merges with Fianna Fáil, Brendan Howlin has said.

The Labour leader was speaking ahead of the start of the Labour conference at the Ballsbridge Hotel in Dublin this weekend.

Mr Howlin said he had written to SDLP leader Colum Eastwood asking him to outline his intentions regarding a potential merger with Fianna Fáil.

He also told The Irish Times that Labour and UK Labour had resisted previous calls to organise in Northern Ireland because the SDLP was their sister party.

However, he said that would have to change should the mooted merger go ahead.

“There is a tradition of social democratic politics in Northern Ireland and there are people who would not be comfortable voting for Fianna Fáil,” Mr Howlin said. “They are a populist party.”

Talks between the SDLP and Fianna Fáil have been ongoing for some time, and sources said whatever announcement is made will not initially be a “big bang” merger. Rather, it is now expected to be the confirmation of a process towards future co-operation, and possibly a merger in the longer term.

Fianna Fáil confirmed the talks last week, as it sought to distance the party from a candidate launch attended in Northern Ireland by two members of its parliamentary party.

Galway West TD Éamon Ó Cuív and Senator Mark Daly attended the election launch of councillor Sorcha McAnespy, who is an independent councillor in Fermanagh on Omagh District Council. The three were pictured with Fianna Fáil-branded posters of Ms McAnespy.

In his letter, Mr Howlin says he would be delighted if Mr Eastwood attended this weekend’s conference to “to discuss the future of social democracy on our island”.

“There have been several reports of a possible merger between Fianna Fáil and the SDLP, now appearing from official sources for the first time,” he added. “The Fianna Fáil Twitter account confirmed that ‘the party is continuing its discussions with the SDLP’.

“There was also a public statement to journalists that said: ‘Discussions between the party and the SDLP are ongoing and a statement on our future intentions will be made in due course’.”

On foot of this, Mr Howlin asked Mr Eastwood to clarify the situation.