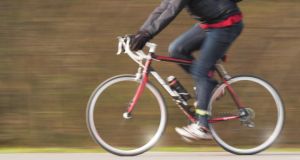 About 2 per cent of the population cycle to work or school each day.

It may be clean, healthy and increasingly popular but cycling accounts for rising numbers of dead and injured on Irish roads.

Latest figures from the Central Statistics Office show the number of people cycling to work or school jumped by 10 per cent between 2006 and 2011, with an estimated 60,000-plus cyclists on the road daily.

A growing emphasis on bike lanes, tax incentives for cycling to work and free bike-hire schemes in cities appear to be some of the factors behind the rise in recent years.

But the disproportionately high injury and death rate among cyclists – relative to the cycling population on the road – is alarming road safety campaigners.

It is estimated that about 2 per cent of the population cycles to work or school each day, based on latest census data.

Prior to 2012, injuries involving cyclists represented about 2 per cent to 5 per cent of all road users injured annually.

The numbers dying on the road have also been on the rise, though numbers have varied from year to year. Last year 12 cyclists were killed, more than double the number the previous year.

The numbers come at a time of tension between some cyclists and motorists on the road, which Road Safety Authority (RSA) chairwoman Liz O’Donnell has likened to a war.


She told The Irish Times earlier this year that while many cyclists did not comply with the rules of the road, there can’t be “equality of responsibility” for road safety between cyclist and motorists.

“Ultimately, if there’s a collision between a car and a cyclist, the cyclist will come out worse,” she said. “When it comes to road safety, enforcement is important but there is also a cultural need for people to be aware they are driving a potential murder vehicle.”

Given the greater popularity of cycling among men, it’s not a major surprise to see they account for the majority of injury collisions.

Men in their 30s, 40s and 50s, for example, accounted for three-quarters of deaths last year. The growth in cycling as a leisure activity is represented in the injury toll. Just over four in 10 cyclists injured in 2012 were cycling for leisure at the time of the collision, while almost one in 10 were cycling to or from work.

A detailed analysis by the Road Safety Authority indicates that morning and evening rush hours tend to be the most dangerous times, when most cyclists are on the road.

Almost half of cyclists were injured at junctions, with T-junctions accounting for most deaths. They accounted for half of all injuries in 2012.

Among the most dangerous manoeuvres taken by drivers who collided with cyclists included right turns, followed by left turns. These alone accounted for four out of 10 injuries to cyclists in 2012.


The majority of injuries occurred in built-up areas. Most took place in daylight hours, with good visibility.

Summer months – when most cyclists are out on the road – tend to be most dangerous.

Cities and towns are the most dangerous areas. In fact, more than eight in 10 cyclist injuries occurred in built-up, rather than rural areas.

Dublin is by far the most dangerous county for cyclists, with more than half of all deaths recorded in the capital over recent years.

It must be noted that the majority of cyclists are based in the capital.

While the number of driver fatalities fell last year, the decline was offset by an increase in deaths among pedestrians, motorcyclists and cyclists.

A third of fatalities in 2013 were among vulnerable road users, rising to four in 10 deaths in 2014.

A spokesman for the RSA said the overall figures indicated that cyclist awareness and education campaigns were critical to highlight the importance of vulnerable road users,

He said good observation by motorists and cyclists, in particular at junctions, was vital.

In addition, public awareness that cyclists are vulnerable and that collisions would be more severe was needed.

Cyclists, too, need to ensure they wear visibility clothing, which remains critical for them, particularly during winter months and during hours of darkness, he said.