Former Harbour Company did not have the cashflow to survive independently, the management report shows 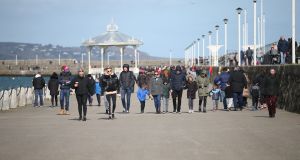 The costs of taking over Dún Laoghaire Harbour have already had a significant negative impact on the financial resources of Dún Laoghaire Rathdown County Council, according to the authority’s accounts for 2019.

Members of the local authority will be told on Monday the cost of initial emergency repairs and transfer of control has already run to more than €2 million, with multiples of that yet to come.

The cost of assimilating the staff and pension payments of the former Dún Laoghaire Harbour Company has added to the burden.

The council’s draft financial statement for 2019 – the first full year of the authority’s control of the harbour – notes “local economic conditions remained robust during 2019.”

“The deficit arose due to the transfer of Dún Laoghaire Harbour to the council,” the draft annual financial statement said.

Council chief executive Philomena Poole and senior management will tell councillors at Monday’s meeting: “For some time prior to its transfer to the council, Dún Laoghaire Harbour did not operate on a commercial basis and was primarily a tourism and leisure amenity”.

The management report says the former Dún Laoghaire Harbour Company did not have the cashflow capacity to survive independently beyond January 2019 and could not therefore transfer to the council as a going concern”.

While notes to the draft accounts said the council “greatly welcomed the transfer of this spectacular amenity, it imposed a significant additional financial burden during 2019”.

Costs associated with the transfer included works, which were under way at the time of the transfer to repair the damage caused to the piers during Storm Emma.

The last Government transferred the harbour to the council after a series of schemes to make the harbour pay came to nothing. These included a floating swimming pool, an urban beach on the east pier, development of the Carlisle Pier to include a national marine life centre, a hotel and apartments, and retail and leisure uses.

The council’s director of services Therese Langan has previously told councillors the cost of “immediate works” could bring immediate costs to €10 million. A consultant’s report found the longer term costs could be as high as €30million.

Local Fianna Fáil TD Cormac Devlin said it was”extremely disappointing” the transfer of the harbour to the council “didn’t come with some form of funding”. Mr Devlin told The Irish Times a “business case” to chart a future for the harbour and apply for State grants for ventureswas needed.