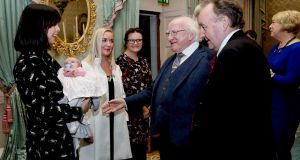 The President, Michael D Higgins meets the newest member of the Humanist Association of Ireland, Zoe, and her mother, Selina Campbell, at the association’s 25th anniversary celebrations. Photograph: Maxwell’s

President Michael D Higgins met the newest member of the Humanist Association of Ireland (HAI) on Monday evening as part of the organisation’s 25th anniversary celebration.

Zoe, aged four weeks, with her mother, Selina Campbell, met the President and Sabina Higgins along with other members of the association.

In 2011, Mr Higgins became the first president of Ireland to include humanists in the official inauguration ceremony – a practice continued at his recent inauguration for a second term.

“The President’s commitment to the inclusion of people of no religion is significant, and warmly welcomed by the HAI,” said Steve Rawson, chairman of the organisation.

“At a time of deep uncertainty globally, we are proud that our President is a champion of human rights, equality and kindness.”

Chief executive Noeleen Hartigan said it was a day to acknowledge the work of the founding volunteers as well as to celebrate the “new generation of humanist leaders who are striving for a more equal Ireland”.

Founded in 1993, the HAI is a community of people who believe in humanist principles and aspire to a “fair, balanced, ethical and responsible secular society”.